It’s been a while since I last recommended a anime or manga, so here I am talking about something new, something that isn’t quite unique but still a good read if you ask me. What I’m talking about is Robot x Laserbeam which focuses on a high school golf club. 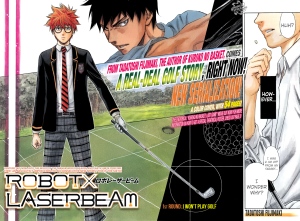 The manga focuses around Robato Hatohara who’s nickname is “Robot” who begins to play golf for the first time. After not being any good at golf, he shows his potential when he joins the club. This manga is being written by Fujimaki Tadatoshi, who also made Kuroko no Basket (Kuroko’s Basketball) which was absolutely amazing sports anime/manga.

If you think something like this might be of interest for you, then just check it out below:

What I like about this manga is how it has actually made me somewhat interested in playing golf. Just last week, I grabbed my first club and went to a golf range for the first time, all because I was kind of interested in this manga. And guess what, I might go again, it’s actually really fun, hit quite a few 150 – 200 yard shots.

Anyways, if you already read or will be reading, lets talk about it in the comment section below.