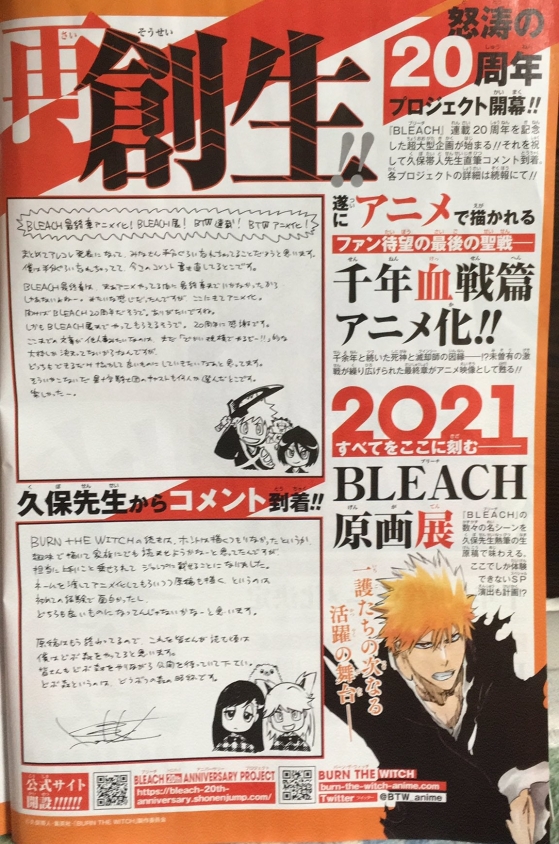 The anime is returning to celebrate the 20 year anniversary as seen in the images above. The announcement was leaked online from the Weekly Shonen Jump which has been shared online quite a bit. We’ll know for sure after the official announcement which will be coming on Saturday.

As most of you know, the anime adaption will be covering Bleach’s manga final arc, which is the Thousand-Year Blood War story arc which we have extensively covered following the war between the Quincies and Shinigamis! Studio Pierrot animated the original Bleach anime which brought some of the best looking visuals for it’s time. There is no word as of now which studio or if Studio Pierrot will be coming back for this project, but we have high expectations.

The manga was brought to a close by Tite Kubo in 2016 to which gave Kubo the time to work on other projects such as the Burn The Witch manga which will also be receiving a anime adaption as part of the announcement and Bleach’s 20 year anniversary.

The Bleach 20th Anniversary website was supposed to be announcing this during the AnimeJapan 2020 event on 23rd of March, but due to COVID-19, the event was cancelled and will be part of a livestream on YouTube. The announcement will reveal the return of Bleach anime in 2021, Burn the Witch’s anime adaption as well as the next manga Kubo Tite will be working on.

So what are your thoughts on this great news? Did you ever expect Bleach anime to be coming back after so long of waiting? Let me know in the comment section below.