Naruto Gaiden 7 reveals Karin to be Sarada’s real mother, this is done by the help of Suigetsu who tested Karin’s DNA and Sarada’s DNA to see that they have a match. Sasuke suspects that Shin Uchiha is an experiment by Orochimaru, they head towards his hideout to find him to have a new body and explains who Shin is in terms of his past experiments. 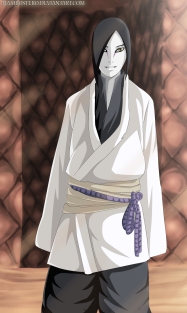 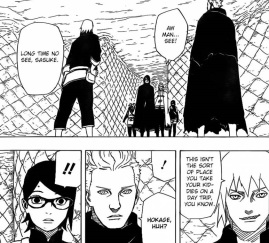 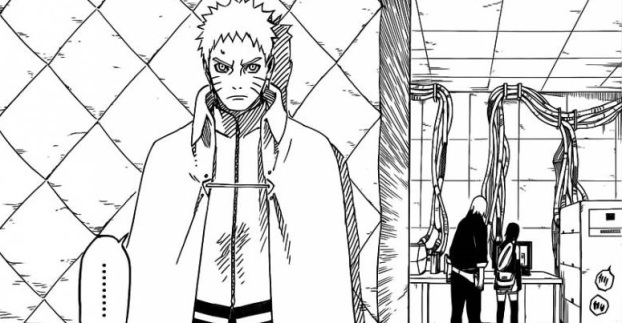 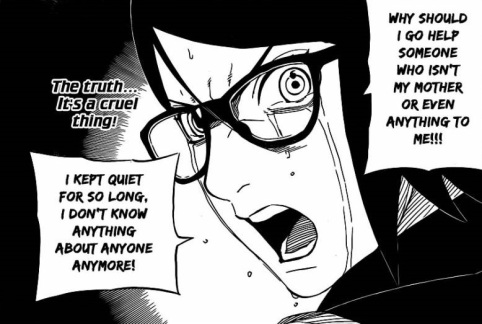 Naruto Gaiden 7 begins as Sakura talks to Shin as he reveals that all the kids here are his clones, they have the same DNA as him, Sakura is shocked that he treats them like this, his not even Orochimaru. When find out that Orochimaru is in fact Shin’s teacher, he was in fact one of his old experiments.

In order for Orochimaru to learn about clone techniques, he did tests on him. Shin use his own teeth in order to cultivate the other clones to life. He describes them as stock to be used as flesh. Naruto tries to find Sakura using his Sage mode to find her but he cannot.

Kakashi had mentioned that this could be something to do with Orochimaru, it’s also very similar to that of Danzo and his right arm. If they want to find Sakura, they will need to go and find Orochimaru’s hideout. They also mention that they will have to take Sarada and Chocho. Chocho can see the tension between Sarada and Sasuke, she tries to calm them by giving them some crisps.

Shin tells Sakura that living things are meant to die, genes, reproductive cells and so on help people live longer, or they’re refereed to as children because they carry on the genes. However, opposite to this, non-reproductive cells or organs die and thus he goes on to mention that he will use these vessels to replenish himself.

Shin goes on top talk about how human evolution sometimes becomes stronger as two separate gene pools are mixed into creating a new being, or their children so to speak. He goes on to mention as things evolve, new techniques and new ninjutsu techniques evolve, therefore war is essential if people are to evolve.

That is why the Akatsuki exists, at this point Sakura calls him stupid for not thinking correctly, calling him stupid and having no idea about what’s truly important. We see Yamato meet up with Sasuke and Naruto in front of Orochimaru’s hideout. They go in to find out to find Suigetsu and Jugo, Sasuke tells him to lead him to Orochimaru’s hideout, Sarada remembers that they’re from the image she has.

Orochimaru appears and greets them, Orochimaru notices Chocho and Sarada there, Sasuke quickly goes on to mention that his underlings tried to kill his child and harm his wife, if he’s planning something he should reveal it right here. Sasuke quickly asks about Shin when Orochimaru shows him a room with one of Shin’s clones in there.

Orochimaru wanted more of his bodies, thus he repeated his cloning technique to unravel the mysterious of genetics. Naruto tries to understand that they’re like Kagebunshin Jutsu but these do not disappear. Orochimaru mentions that these clones reborn all on their own, they have their own personality and thoughts.

They’re cultivated so it takes time to regrow, however their genes are the same like father and son, or even siblings. If he wants to get rid of them, he’d have to completely kill them off. Naruto mentions that it’s not that simple when it comes to humans. Orochimaru mentions that people are slaves to their genes and are quite simple.

Sarada speaks asking what about non-clones, what about a regular parent and child, Orochimaru smiles and responds seeing as she talked. Sasuke mentions that there is no time to play around, if he knows where she is then take them.

Orochimaru agrees to the Leaf taking over and taking Shin of his hands, he’ll give him all the details so let’s head to the monitor room. They go on ahead when Sarada speaks to Suigetsu, she shows a picture of them asking where Karin is. He mentions that she’s at a different hideout, she then asks a favour of him, as she tells Suigetsu that she thinks that she could be her real mother.

He goes onto move some of her work around and find some of her genetic material that she somehow kept in one of her draws. Suigetsu then gets some genetic material from the inside of Sarada’s cheeks. He begins to analyse them, after a few seconds she see’s an exact match! Suigetsu concludes that Karin and Sarada are a DNA match, proving Karin is Sarada’s mother!

While this happens, Naruto silently hears them out, all while Sarada remembers Sakura and her smile, she cries while Suigetsu mentions that they have similar glasses. Naruto tells Suigetsu that he’s always getting in the middle of things, calling him a dumb ass for what he did. Suigetsu mentions that it’s Sasuke’s fault for fooling around.

Naruto enters the room telling Sarada that they’ll be leaving soon, so she should come with him. Sarada is still crying after finding out that Sarada and Karin are mother and daughter. Sarada thinks that Naruto and Sakura have the same atmosphere. He mentions that they need to go save her mother, Sarada shouts that this is a lie, the Seventh is a liar. She activates her Sharingan as she tells him why she should go help someone who isn’t her mother, or even anything to her. Naruto Gaiden 7 ends with an explosive ending.

A brilliant chapter, it seem that Sarada and Sakura have some talking to do, on top of which Karin may have some explaining to do here to Sarada. I still have little doubt to why Karin would have her own DNA in one of her cupboards, and it could easily just be Sarada’s DNA which Karin’s kept for some odd reason, giving the perfect match, or even Sasuke or Sakura’s DNA. Still it was a brilliant chapter, we’ve finally found that Sarada is truly the child of Karin and Sasuke, while Sakura kept a watch of her. Can’t wait for next week’s Naruto Gaiden 8 when we see what Sasuke’s reaction could be to all this.