Bleach 605 shows Ukitake’s Kamikake which seems like an overseeing eye, it being successful as well as Ichibei and Yhwach beginning their battle. We see Ukitake and Shunsui and talk about whats going on in Seireitei while Ichibei tells Yhwach that he will rip of his throat. 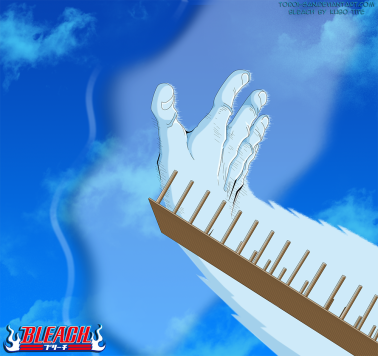 Bleach 605 begins as Shunsui goes around Seireitei mentioning how they did a good job of destroying everything. He wonders if when they are chased away, will the damaged buildings be all repaired or the Seireitei will be damaged.

Ukitake shows up mentioning that they could always rebuild, it seems that they let them invade Soul Society and the Soul King Palace. Ukitake mentions that that’s why Kamikake was successful, it seems that he had placed some kind of thing that may get revealed later on.

Shunsui mentions that in that case they can push it a little, he goes on mentioning that he has some business with Room 46. We see Ichibei show Yhwach that from the space he’s drawn, he will defeat him. However Yhwach mentions that he will die 3 steps before this.

He draws a shield on the real Soul Palace when a massive hands shows up to quickly follow Yhwach. It goes to him and smashes pushing him back a lot. Ichibei uses his Senri Tsuutenshou or Piercing Palm of 1000 Ri. He shows up above Yhwach and uses it when Yhwach goes to cast something he cannot.

Ichibei has him in a trap, he told him that he would rip and crush his throat to which he will do now as he sends Yhwach another 1000 RI. Yhwach himself pierces his own voice box in the neck and gives himself his voice. then uses his holy bow to rip himself apart from the bottom.

Ichibei tells Yhwach that he didn’t think he would shoot an arrow through himself, Yhwach just takes the arrow out of himself, while Ichibei mentions that he seems to have no choice, he will now kill him with everything he has. He turns around showing his face with white eyes, no iris. Bleach 605 ends here.

A damn good chapter with a lot of great stuff happening. It’s certainly getting really interesting. Plus the balance between the story and battle are truly getting better as we learn about Shunsui’s intentions as well as see Ichibei vs Yhwach. Can’t wait for next week’s Bleach 606