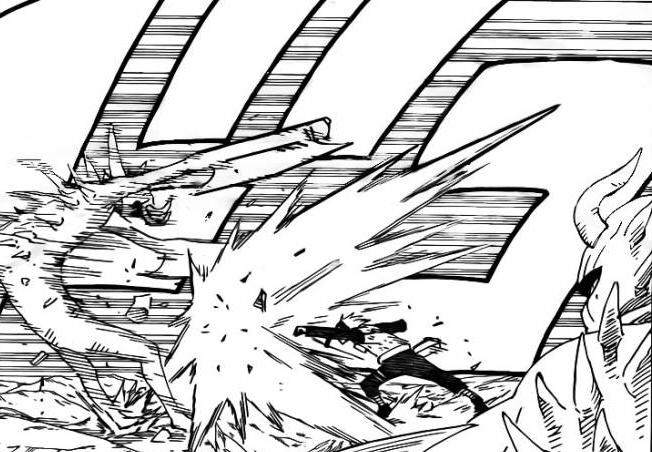 Naruto 632 shows us what Sakura has been up to all this time as she enables her powerful jutsu which is exactly the same as Tsunade’s giving Sakura a big boost allowing her to fight with Naruto and Sasuke by her side. The Hokage’s prevent another Bijuu Dama from going off, while a clone Hashirama goes to fight Madara, he mentions that he’ll wait for the real one.

Naruto 632 begins as Naruto tells both Sakura and Sasuke to get ready as they’re about to go. Ino feels nostalgic as it brings a few good and bad memories. Shikamaru only thinks of the now and that they’ve got an enemy in front of them, thus it’s the only way to defeat him. Plus he’s not going to acknowledge Sasuke.

Choji is happy that they’re all together, plus the last time they were together was the Chunin exams. Kiba shouts mentioning that he wants to become Hokage, he asks if anyone else is listening. Shino tells him that what he’s doing is pathetic and that he should stop. It had a much bigger impact when Sasuke said it. Hinata tries to support him by saying that she’s listening, plus everyone wants to become Hokage. Naruto shouts that they’ll all show them their full powers.

Jugo looks at Sasuke wondering what he’s thinking now, Ten Tails once again builds another awesome and massive Bijuu Dama, Minato tells them to prepare for this, they start to quickly decrease the barrier size squeezing the Bijuu Dama next to the Ten Tails. They do this so tightly that the Bijuu Dama explodes leaving the Ten Tails somewhat injured and the barrier doesn’t seem to be broken as a hole was made at the top for it to escape.

Naruto compliments the previous Hokage’s to how powerful they really are, Hashirama creates his wood clones which all go to a different place. They mention that they will create an opening on the four sides of the barrier for the shinobi to enter. Everyone is told to quickly go when the head of the Ten Tails has also been trapped. A final clone of Hashirama’s reaches Madara telling him that he will be his opponent.

He apologizes to Madara for making him wait, Madara refuses to fight him as a clone is too boring. He’ll just wait until the real one comes out. All the Hashirama’s detract the barrier and the Shinobi’s enter it. Out of nowhere, the Ten Tails starts to form Zetsu like people in which it uses to make sure that no one can get close to it.

Sakura notices that both Naruto and Sasuke have once again taken the lead, she remembers being back since the exams as both Naruto and Sasuke were dominant, they always fought shielding her. She mentions that she hated this and that she decided that it’s time for her to show her back to them. She attacks an enemy but can’t seem to be pushing it back.

We see that Sakura went to Tsunade, she mentions that Medical Ninja’s mustn’t die so they must stay back, Tsunade tells her that this is true but it doesn’t mean that she mustn’t know how to fight correctly. Tsunade tells her that she’s her disciple, therefore she must inherit the power of the sannin as well as her Yin Seal technique in which it has just shown up on her forehead.

Sakura mentions that it’s all filled up, and now she can finally release it. She punches the enemy back that it literally pushes a lot of other clones back. She jumps into the air and quickly smashes the ground just like hulk pushing a lot of enemies back. Naruto looks and quickly gets scared, mentioning that he’ll never get on her bad side, Sasuke smiles.

Hashirama notices Sakura’s powers and that it could even be worse than Tsunade’s. Shizune even notes that Sakura has been saving up chakra in one spot for 3 years which is extremely precise chakra control. Even she wouldn’t be able to do the Hyakugou No Jutsu. Sakura mentions that she doesn’t need to use it to look younger.

She quickly notices how close she is to the Ten Tails, both Naruto and Sasuke keep on getting closer, with their own techniques. Sakura notices Sasuke’s arrival, Naruto gets a little jealous when mentioning that he’s there too. Sasuke tells him not to get in the way, Sakura mentions that if he doesn’t fight, he will take the Hokage Seat. Naruto is surprised that she wants to become Hokage too, and that this time Sakura wants to go back to back fighting on their level. Naruto 632 ends here.

What a great episode, bringing Sakura back from what we thought of just a calm medical ninja to what we know now as a very strong shinobi who seems to now be compared to Naruto and Sasuke! Can’t wait for next week’s Naruto 633, when we see even more action! Can’t wait!