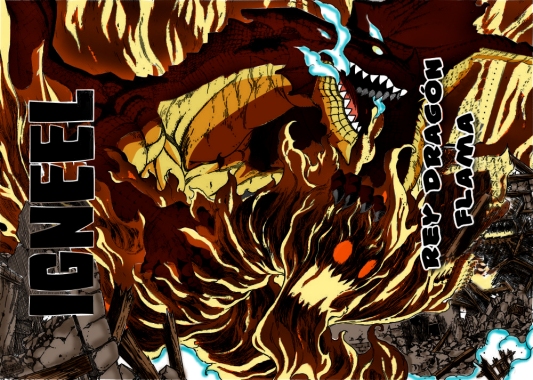 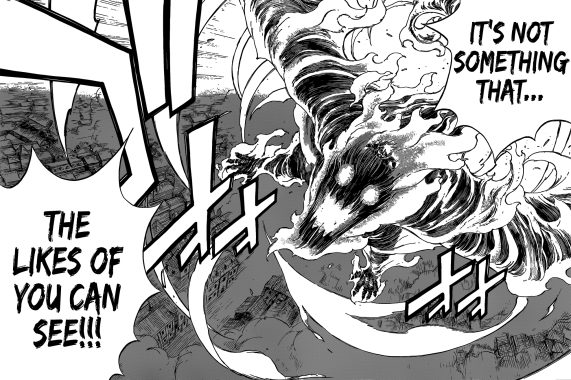 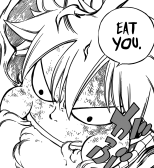 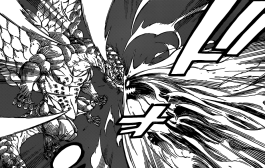 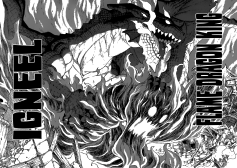 Fairy Tail 332 is surely getting better and  better, from Lucy’s fan service to even more awesomeness in this chapter. We see a number of great things such as Natsu’s arrival onto Atlas Flame, the fire dragon to which Natsu starts to engulf and flame and begins to power up. Fortunately Atlas Flame realizes that Natsu has a father-son connection and helps him reach Future Rogue once again.

Evergreen mentions that they need someone who can affect him, out of nowhere Natsu appears and lands right on the Dragon. Natsu doesn’t seem to be burning, however what is happening is that he mentions that he’s Natsu and that he’s going to eat him. At this point he starts to engulf and eat all the flames he can! Atlas Flame is confused that he mentioned this, it’s as though he’s mocking him.

Natsu keeps on eating him, while Atlas Flame keeps bashing his side until Natsu comes off him, Natsu keeps on hanging on while he eats. Natsu tells Laxus that he’s going to take care of him and that he should go to the castle to help Wendy. Evergreen and the others mentions that she’s still inexperienced and that she they need to go there and help her. Laxus asks him if he can leave it to him, Natsu reveals that he’s powering up just by eating. Natsu and the others leave.

Atlas Flame asks Natsu what his connection is to Igneel, he mentions that the Flame Dragon King, Igneel is his dear friend. Natsu reveals that Igneel is in fact his dad. Over the skies, Future Rogue, speaks to himself on how wonderful his plan is going. He mentions that as long as he has this power he will be able to take down Acnologia. Plus he will be able to take the world as well as make it his oyster.

The Earth will crumble, the skies shall burn. The flames of life will be extinguished as he is the Dragon King. The emperor born from the dragon king festival. He goes on to mention that the shadow will become the light, this light which will illuminate the world. Natsu appears behind him, he mentions that he doesn’t need such a dirty light. As their light comes directly from their heart!

Natsu rides the Atlas Flames as though it’s no longer under control. He heads against Future Rogue as though it’s going to bash into it.  Which it does. Future Rogue is surprised that he’s riding Atlas Flame. Atlas mentions that from the bottom of his heart, he should help the son of Igneel, who is a dear friend of him. Natsu mentions that he’s counting on him, adding uncle to the end. Fairy Tail 332 ends here.

A great chapter which has not yet finished. The chapters are getting better and better, and the arc is just starting. It’s going to be interesting when we find out that Future Rogue is Acnologia himself. This is what I think, can’t wait for next week’s Fairy Tail 333, titled “Man and Man, Dragon and Dragon, Man and Dragon”. An interesting title which seems to be something that might be pretty good.