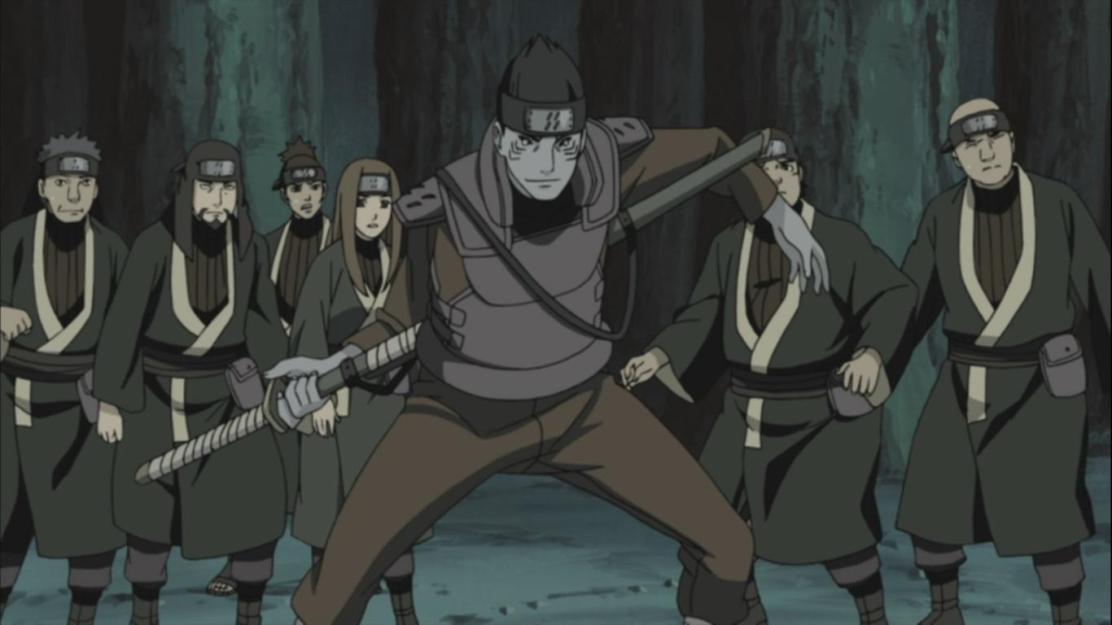 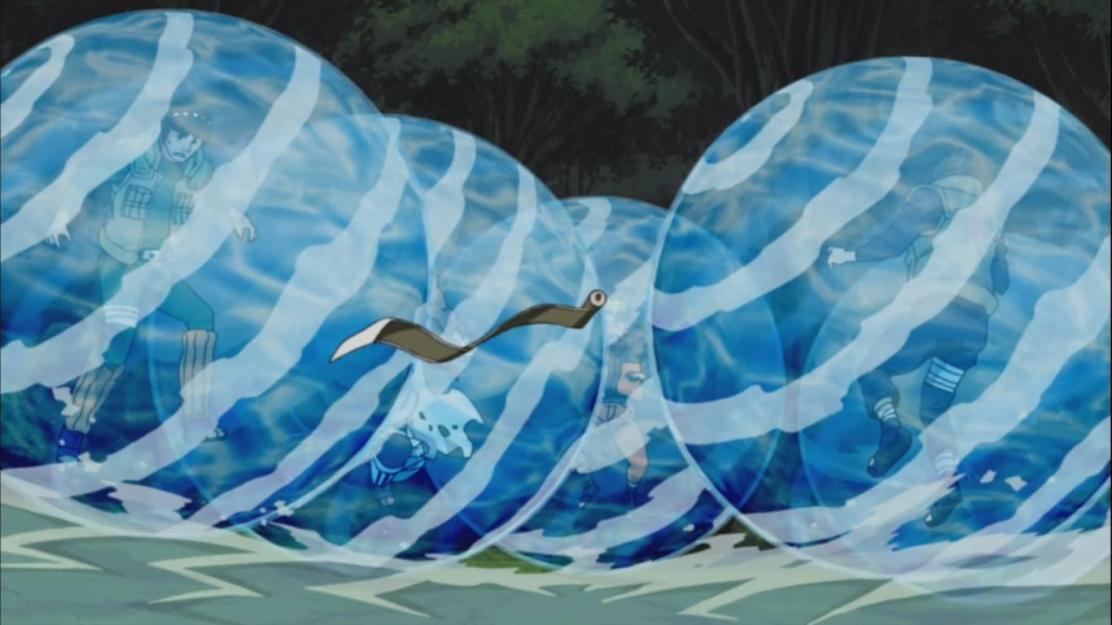 After the crazy aftermath between Kisame and Guy, the fight ends and a hint of Kisame’s story is told. We get to see a mysterious man control the Fourth Mizukage, with the name of Madara Uchiha. We see a tragic death of Kisame when one of his Sharks kills him. While Naruto, Killer Bee, Guy, Yamato, Aoba and Motoi become trapped within a Water Prison when Guy opens the scroll.

The epic battle between Guy and Kisame ends with Kisame being defeated while Guy stands on top of him. Kisame twitches his thumb, which causes Guy, in his Seventh Inner Gate, to smash Kisame as he lays there paralyzed. Yamato captures Kisame while he stays still.

They start out in a forest while they eat peacefully. Kisame notices that the string trap has been initiated so he tells his comrades that they need to go as soon as possible. As they jump from branch to branch, the woman starts to build some sort of relationship with Kisame, as she says that after the mission they go and get dinner.

Fuguki Suikazan, one of the Seven Ninja Swordsmen of the Mist, tells Kisame to Guard the Cipher Corps and protect the encoded missive. After this he is told that none of the Cipher Crops members must fall into enemy hands as they may be taken hostage and get mind read.

At this point, most of the Cipher Corps are left behind and which are then killed by Kisame as he is only following what he has been told to, which is to make sure that the Leaf Village not get their hands on the code.

As only three are left, the woman and two men. Kisame gets ready to once again kill them since they are likely to be captured by the Interrogation Squad. Kisame backs up as the Leaf Ninja’s arrive, and throws himself off a cliff.

We then see Kisame go and kill Fuguki as well as replace his current sword with the one he currently had. The Samehada. Silently the Fourth Mizukage appears from the darkness with someone mysterious behind him. He calls himself Madara Uchiha, but that is unlikely since Madara had been killed a long time ago.

Madara/Tobi tries to get Kisame on his side by telling him that he has a plan to control the world, which is called Project Tsuki No Me. Kisame gets on his side since he has the powers to control the Three Tails. At this point Kisame asks for Madara/Tobi to prove who he really is. As he start to walk forward, Kisame bites his tongue to wake himself up to prevent Aoba from extraction intel.

At this point, Kisame creates a Water Prison Jutsu to trap himself within one, so the other people wont be able to attack him. Kisame then summons Sharks onto his Water Prison, and flashes back once more.

This time he flashes back to when he met Itachi for the first time. They both talked about how they both killed their own comrades, while Itachi didn’t mean to actually do so. So Itachi gave some advice on how Kisame is more of a Human then a Shark.

At this moment, Kisame suicides as one of his Sharks kills him. Currently the other people are shocked how Kisame had died, since he was very powerful yet died by suicide. Kisame’s Samehada is also upset as he has lost his master.

After they have the Intel, Guy opens it to see what was inside, only to find out that there was a booby trap which caused all the people there to enter a Water Prison with Sharks inside them. They notice that one of sharks has eaten the scroll and runs off with it. They aren’t able to stop this shark. The episode ends here.

What an amazing episode, Kisame’s past has been revealed, and also if you looked close enough you would have noticed that Madara/Tobi has blue hair. Which is a start to find out who the real Tobi is! Naruto Shippuden 252 will be amazing! Can’t wait for Tobi’s fight!