Naruto Shippuden 343 reveals the identity of Tobi to be Obito Uchiha! We finally know who the notorious person is behind the mask, which is none other than Kakashi’s team mate. Naruto cracks Obito’s mask to which Kakashi is paralysed when he finds out. We’re reminded of their story to which Rin is highly involved. At the end of it all Madara arrives out of nowhere after defeating the Five Kages! 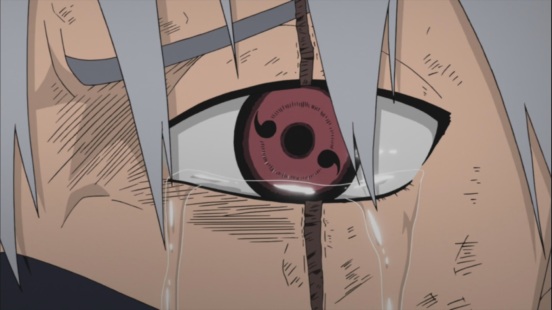 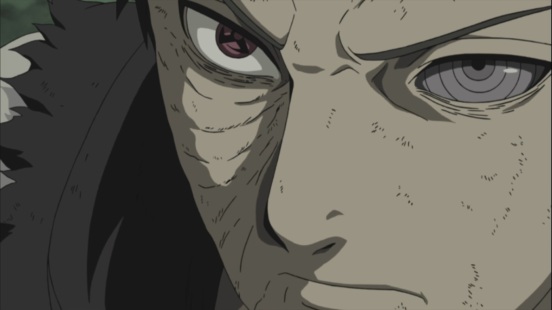 Naruto Shippuden 343 begins as Naruto begins with his attack, however Obito quickly escapes it using his technique to move through anything. Kakashi fades out to which he’s unable concentrate on what he should be doing. Obito gets underway to which he begins to launch large Kunai’s out, a tentacle is blocked by Bee while Naruto blocks the one coming his way.

Furthermore, Kakashi learns that Naruto has all of them, he gets revved up and begins his counter attack. Obito goes up and launches a large number of metal rods to which they seem to be aimed at Bee to which they disable Bijuu jutsu’s and power. Naruto creates and clone and goes to attack Obito to which Kakashi activates his Kamui.

Obito seems to have killed the shadow clone, Kakashi falls over while Obito tells him that he’s failed the Kamui, Naruto then creates a large Bijuu Bomb. Obito goes in his inner world to which he notices a shadow clone with a Rasengan there to which he smacks the Rasengan right on Obito’s face breaking finally breaking the mask.

The mask breaks when we go to the past, we see Obito see his friends go out from the school, to which he was late on applying too, however Rin helped him out. While later we see Obito be late helping the elderly, he’s given a sweet to which when he arrives he tries to attack to impress however his sweet gets stuck and they lose the match.

Rin helps him out, he begins to train harder and harder with all his techniques. He faces Guy in a match but quickly loses to him. Kakashi faces Guy and wins while Obito states at Rin, it seems she likes him. Kakashi passes his exams to which Obito keeps on training until he passes his Chunin.

Rin tells him to meet Obito later on, he brings some flowers to which he thinks they’re on a date, however all their friends show up to which Rin gives him a paper to which they want to celebrate him being a Jonin. They go a mission, Minato gives him one of his special knifes, Rin gives him a special medic case. Kakashi gets nothing from Obito. Minato tells Obito that his father has killed himself.

They all depart with Obito now acknowledging Kakashi as his leader. They go and encounter some villains, Rin is quickly taken by the enemy. Kakashi proposes that they finish the mission and come back to Rin while Obito mentions that people who break the rules are scum, but people who break their promises are even worse.

Obito finds their hideout to which he’s about to get killed when Kakashi shows up to save him. However the invisible villains get Kakashi in the eye. The enemy goes for Kakashi and Obito when he activates his Sharingan and is able to see everything, he kills the enemy and gets Rin back. They try to escape when we see that Obito has been crushed, we see Obito say that Kakashi is always great.

We return to the current time when Kakashi and Guy are shocked to see Obito there, he seems to be Obito. Obito mentions that he doesn’t care. We see that Obito had previously mentioned after killing the man that he will protect his comrades. We also see how Kakashi was saved by Obito while he got crushed. For Kakashi’s present for being a Jonin we see Obito give him his left eye for the one that’s been damaged. He also mentions to protect Rin with his life.  The enemy arrive and he’s buried.

Obito is alive, Naruto is explained of who he is. Kakashi asks why he’s there when Obito mentions that it’s because he let Rin die! Kakashi is shocked, while Naruto mentions to him that they must defeat of what’s about to happen. Obito goes for a Fire style when Naruto stops it. Madara quickly arrives and mentions that Obito sure is having fun. Naruto Shippuden 343 ends here!

What an awesome and crazy chapter, after just finding out that Obito is alive, we see the awesome and crazy Madara arrive, this is sure about to get all crazy and awesome! I can’t wait for next week’s Naruto Shippuden 344, titled “Obito and Madara”, when we find out everything and anything about how Obito survived and how it all connects together to Rin’s death!