Naruto Shippuden 416 begins another small set of terrible and over repeated fillers with Kakashi, Obito and Rin, with their first mission with Minato. It goes all wrong when the shinobi’s they’re accompanying betray them whilst carrying a special scroll. Minato and Obito have to face a large number of enemy shinobi as they’re trapped within a dense forest. 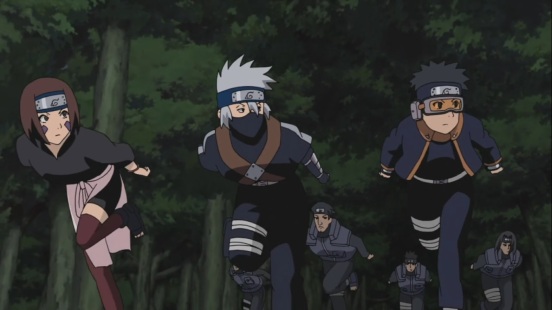 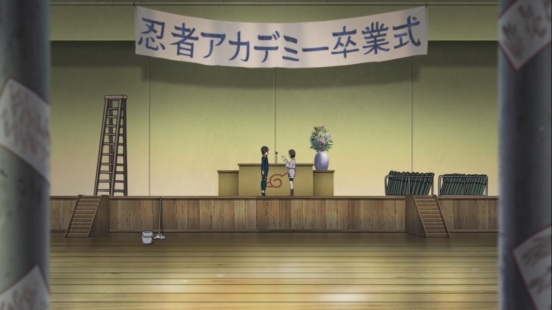 Naruto Shippuden 416 begins with Obito going around as he over hears others talking about Kakashi, they mention that he’s a terrible person who only wants to finish missions even if it means leaving a person behind. He remembers that Kakashi would never do that. Next few days he talks to Rin about if she’s seen Kakashi around, she says that she hasn’t.

They part and he goes to the park, he see’s Kakashi there sitting. He says hello, Obito begins to talk when Kakashi just gives him a look as though he’s dead inside, Kakashi tells Obito to leave him alone. Obito trains really hard when Rin comes by to say hello. Obito is training to surprise Kakashi.

One day Hiruzen asks Minato to supervise Kakashi to make him a better person. At the graduation ceremony, we see Obito and Rin at the ceremony as Rin is waiting for Obito to arrive as he’s once again late. Obito and Rin are finally Genin. They’re also on the same team, there being a third member who is Kakashi.

Minato teaches them about teamwork with the test. Obito, Rin and Kakashi go on a mission to find a cat and a lost item. Obito quickly does this by asking the grannies, he also receives sweets and such from them. It seems all the odd jobs are done, Hiruzen assigns them a mission outside the village.

Rin tells Kakashi that he’s been worried about him, at the mission. They have to escort a scroll without getting it lost of caught by the enemy. Obito realises how awesome Minato is when he also mentions if he’s stronger than the White Fang when Kakashi just runs off.

Minato realises that this is much more of an important mission as they have to split up, Minato and Obito fight against the chasing enemy members. Obito is caught up in a shadow clone but Minato comes to help him. Lots more enemy members appears. Kakashi and Rin help the other escorts. Kakashi tries to block the kunai but one of the kunai’s get through and hurts an innocent member over the bridge, he falls off.

Once they’re safe outside the forest, one of the people there tries to thank them the other two betray them by killing him. These two enemy members now get ready and try to attack. The member who is on the ground realized that they could be the traitors there. Naruto Shippuden 416 ends here.

A somewhat of a terrible episode that tells the story of how Kakashi will turn from being a nasty team member into helping and making sure that everyone is safe. Next week’s Naruto Shippuden 417, titled “You’ll Be My Backup” see’s the end of this stupid filler and back into where Obito and Kakashi are facing the dreaded Madara.