This blog post answers day 20, answering who I think the most annoying anime character is, someone who gets on my nerves so much that it just makes me want to give up on the show. 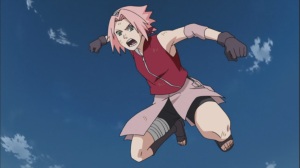 So in terms of hating an anime character, there are quite a few to dislike and hate. Let’s begin with the anime Naruto, the anime and manga is great, it’s come a long way, and as the anime comes to an end, there is one specific character which I haven’t really liked throughout the lifetime of the show.

That person is Sakura Haruno. I don’t particularly hate her, I just don’t like her. She has developed a lot from the whiny individual back in the school, but in terms of weakness, she is still in that stage. In comparison to Naruto and Sasuke, she puts herself down a lot, and just witnessing that is annoying as hell. She can be good when she needs to be, but the other times she can get on my nerves. 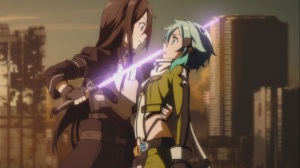 Sword Art Online, another great and fantastic anime, but the second season is terrible, I honestly think that it’s largely due to two specific characters. Kirito and Sinon. Both go from good to amazing characters straight to the trash. They become unbelievably horrendous characters to deal with, specifically within the mid-point of the Gun Gale Online arc.

It slows down so much, which I think was a animator’s choice and not the characters themselves, but still I can’t blame anything else except how they were represented. Such a bad arc, even if it opened a few questions here and there for the anime. I just hope they couldn’t do a better job of the series.

There are many more characters I could talk about, some can get on my nervous quite a lot, but some not so much. The one that has been getting on my nervous for the longest time now is:

Lucy Heartfilia, from the anime Fairy Tail is potentially one of the most annoying characters alive. She is the definition of fan-service. The clothes the author draws on her, as well as the way she is drawn when she is around Natsu. It is one of the most annoying things that happens when watching and reading the show. Yes, some people might find it to be a way for Lucy and Natsu to have their “shipping” moment, but it’s been done so many times that it’s infuriating.

Many who watch would potentially understand where I’m coming from. On top of being a fan service for the series, she is one of the weakest and most useless characters in the series. And when she manages to “somehow” defeat the enemy, she turns into some sort of powerhouse who is able to do anything.

Nevertheless, I could go on an endless tirade for Lucy, although I still watch and read the anime and manga, I get pissed off since she always gets on my nervous. Nevertheless, which anime characters gets on your nerves? Go ahead and comment down below telling me what you think.