As part of the anime challenge, which I’ve taken a long time to complete, this question will be answering day 19, which addresses what I think the most epic anime scenes are in anime’s, well at least from the shows that I now.

So in regards to with this the question for this post, it is largely based on personal preference and thus is based on the anime I’ve watched. So im sure I’ve missed out on many anime’s which have even better anime moments and scenes, which might be even better.

Anyways to begin with, let’s start with Fairy Tail. Fairy Tail is a good anime, although at times it gets on my nerves on how predictable and the amount of fan service it has. Nevertheless, there are some really amazing moments in the anime which reflect how the anime is headed.

One of these great moments was the appearance of Natsu’s father, Igneel at a crucial time before Tartarus and Acnologia destroyed everything. Igneel’s father apparently went missing on the year 777, but later appeared from inside of Natsu in order to fight the great evil that is Acnologia.

However, this is in fact false information as Natsu was born over 400 years ago, then later transported into the year 777 whilst the dragons hid inside of Natsu and others. The fact that this piece of information was missing all this time and we finally get to see it in the anime is fantastic, made for an intense and great scene. 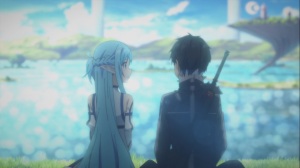 In regards to another good anime, Sword Art Online is a great one, I really liked the series as a whole but there are some patchy parts here and there. One of the best parts that I feel like the show represented itself in a really good light was during the end of the first season. The battle Kirito and Asuna faced was done splendidly well.

Fate Stay/night: Unlimited Blade Works is another fantastic anime, I even featured them on this anime challenge for having some amazing animation. The scene that got me into the anime itself was actually the very first chapter, the animation on top of the intense fighting definitely delivered.

The scene I am talking about here is the fight between Archer vs Lancer where both fought against each other in a very particular way. The fight was awesome and probably one of my favourite moments in the anime, in fact I think all of the fight scenes within the anime are pretty dope.

Naruto and Naruto Shippuden, fantastic series which is coming to an end. It has definitely had some great and fantastic moments. Hard to decide which of them to pick on, but from the amazing moment, there is one that I really like.

This moment, scene or fight was the attack of Akatsuki/Pain into the Leaf and against Naruto. Naruto with his Sage abilities against the many faces of Pain was something that I found to be quite amazing. The fight was well done, even with the addition of Hinata to the mix, which in turn enraged Kurama to come out was also something I thought to be amazing.

So in terms of the best, I think that the best moments come from Bleach.

This is the Final Getsuga Tensho. It’s a technique used by Ichigo Kurosaki in the anime Bleach. It is potentially one of the greatest techniques/final form anyone could have. Ichigo was able to activate this form when he talked with his inner Hollow and Zangetsu in order to obtain this final form.

When all hope was lost in defeating Aizen, Ichigo stepped up to fight by sacrificing his own powers in order to obtain an even stronger power to defeat the likes of Aizen. Although he was unable to kill Aizen, he was able to defeat and get Urahara to seal him away in the deepest and darkest place in Soul Society.

In my opinion, this is one of my favourite and best moments in the world of anime. Ichigo was unable to battle against Aizen, but then gained an awesome power which shocked and blew Aizen away.

Anyways, what are your thoughts on this option? What is your favourite and more epic anime scene ever? Go ahead and use the comment section below to tell me, let’s talk about all the awesome moments.