Bleach 653 see’s the defeat of Lille as Shunsui and Nanao absolutely destroy the God’s Trumpet attack by reflecting it towards Lille, cutting his body and causing his body to disperse into a large number of piece. We visit the past for a little while when we learn that Shunsui’s brother found peace when he married Nanao’s mother. 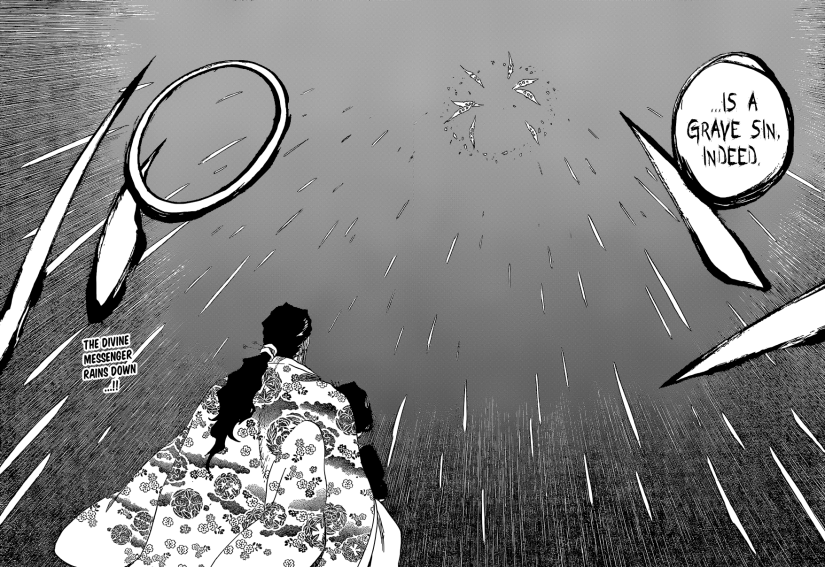 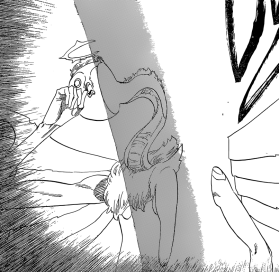 Bleach 653 begins as Shunsui’s brother receives a hairpin from Nanao’s mother. He asks why just one, when she mentions that when she’s suppressing hollows and he’s not around, she wants to know that she’s holding to the same things he is, it inspires her and keeps her strong. Shunsui watches with a derpy face when his brother smacks him telling him to go home and do work.

Shunsui asks him how he’s changed and become much calm and content. His brother mentions that it might be because of the kindness that Nanao’s mother has shown her. This is why Shunsui holds the two hairpins, for his brother and his wife. Nanao keeps on fighting when she finds the gear of holding a sword.

She had no idea fighting with a sword could be so frightening she mentions. She is unable to move, it seems that her own sword has cut her, it’s probably the light that burst out just now. She mentions that ti hurts, and she didn’t know being cut would hurt her so much, she is also quite scared.

Out of nowhere, we see Shunsui show up behind her as she feels his support. Lille notices that Shunsui has shown up, on top of that he’s hiding behind Nanao. Lille calls upon one of his strongest abilities called the God’s Trumpet as she tries to release its sound to kill all.

As it begins, Nanao is told by Shunsui that it’s time to attack, he will be right behind her. She feels the compassion within him towards her, even after she arrived there to help him, it’s her that requires the help. However, now she grows stronger. The God’s Trumpet sings loudly as it begins to destroy the landscape the longer they’re on there.

However, one thing still exists, this being the fact that Lille’s body is literally cut in half after using this ability, Shunsui and Nanao still stand as Lille notices that his body has been completely destroyed and cut, he remembers the properties of the sword at reflecting Godly attacks. His body begins to crumble and fall to the ground as Nanao and Shunsui watch on. Bleach 653 ends here.

A fantastic chapter, even if it was a little late, it seems that it was quite similar to the previous I had previously written. Anyways, I honestly can’t wait to see what happens next. Can’t wait for next week’s Bleach 654, when the story continues.