Naruto Gaiden 10 comes to a close as we confirm that Sakura is actually the mother of Sarada while Karin is in fact the person who delivered Sarada when Sakura was in their hideout. While Sarada might not know this, she understands that it’s feelings and connections that connect them together, and what makes who they are. This is the final chapter of this series. 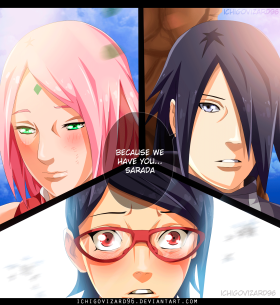 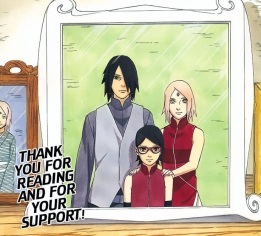 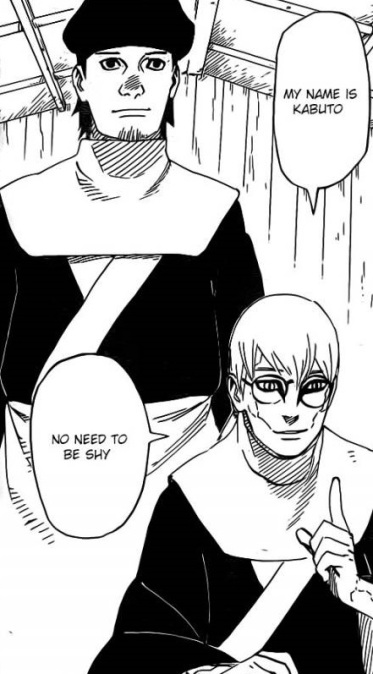 Naruto Gaiden 10 begins with Sarada showing her power as she jumps into the middle of all the Shin’s and kicks their ass. Naruto stops one of these Shin’s and shows him Kurama, to which it scares him. He tells him that there is nothing to be afraid of, if he doesn’t do any worse, than he won’t do anything either.

Sasuke calls him too soft, asking what he’s going to do to them. He said that there is an organisation for orphaned kids, Sasuke knows that they have Sharingan’s to which he will support them with their training and so on. Chocho tells Sarada that her own family is awesome, having total superhuman strength.

Her eyes have also activated with her Sharingan. Sakura approaches Sarada and quickly gives her a big hug, mentioning that she very worried. She also mentions that she learnt about their plans to fight from Shizune, she mentions that she is her child, no doubt about it. And an idiot child that is.

Sarada goes on to mention that it’s what feelings that make and connect everyone. Sarada asks if her feelings are well and truly connected to Sakura, to which Sasuke mentions that it’s true, while Sarada asks how she can believe him.

To which Sakura and Sasuke mentions it is because they have her. They all go on ahead. At the orphanage we see all the Shin’s, even the big one, as Kabuto has become the head of the orphanage, he mentions that he is their father now. Elsewhere, we see Chocho notice someone from the back as she asks if they’re her real parents.

Out of nowhere, we see Choji in his slimmer form to which Chocho is shocked, Ino mentions that anyone who might see him now would be shocked at this form now. Chocho asks if this is some kind of secret passed down through the Akimichi clan, to which is it, and quickly asks to start her training tomorrow.

After some time, we go through the day as Sarada, Sasuke and Sakura all spent the night together as they eat some food together. It’s time for Sasuke to once again go on a mission, Sasuke goes on to hug her, on top of which he puts his fingers on Sarada’s forehead. Sakura gives Sasuke his lunch, and they look at each other, but he keeps her waiting and not kiss her.

He smiles as he moves on, later on Boruto talks to Sarada thanking her for what she’s done and delivering the lunch box. She mentions that she also reached her own goals, so it’s him who she will thank. Sarada mentions that she wants to become Hokage so she can help everyone, to which Boruto thinks she’s ridiculous.

Furthermore, Karin quickly mentions that she’s the one who delivered Sarada, the DNA she got was from the umbilical cord between Sakura and Sarada. Sakura was chasing after Sasuke when she ended up at the hideout where she helped deliver Sakura.

Karin mentions that she just wants Sasuke to be happy, and there is also some friendship between woman too, she’s not over him. Connections comes in many forms, she also mention that he needs to apologize to Sarada for all of it. And she owes him a new pair of sunglasses. She’s also outgrown the last one she gave her. We see a family portrait of Sarada with Sasuke, Sakura and Sarada. Naruto Gaiden 10 ends here.

A fantastic end to the series, on top of which Sarada probably now knows that Sakura is her real mother. And having a brilliant new family portrait to make it all nice and legit, is something that she will truly like. This is the end of this series, so there most likely won’t be any more chapters after this. Although, a new spin-off series would also be pretty cool.