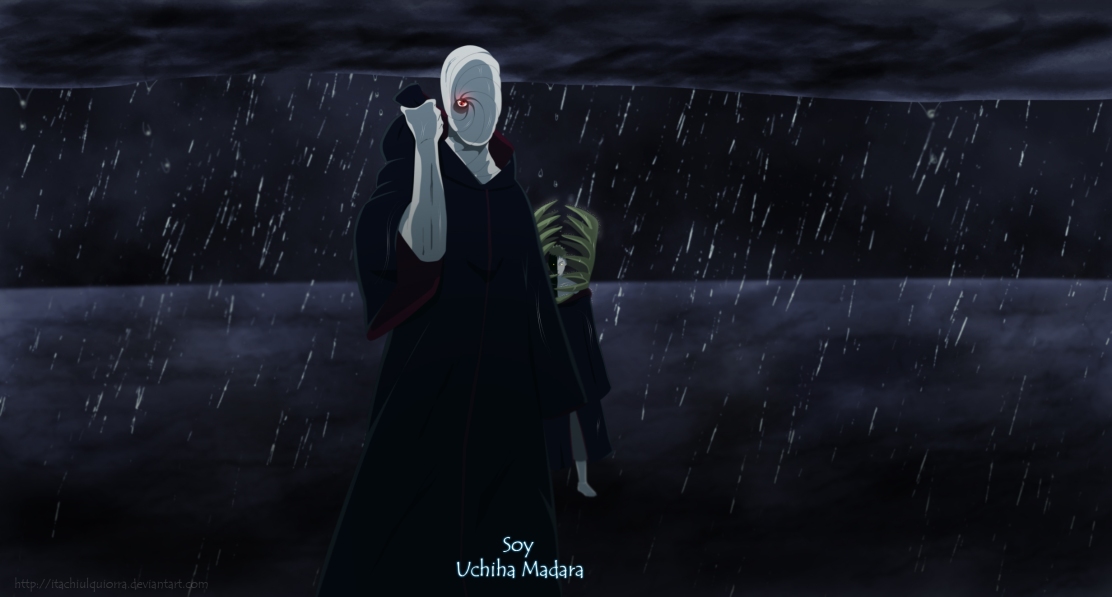 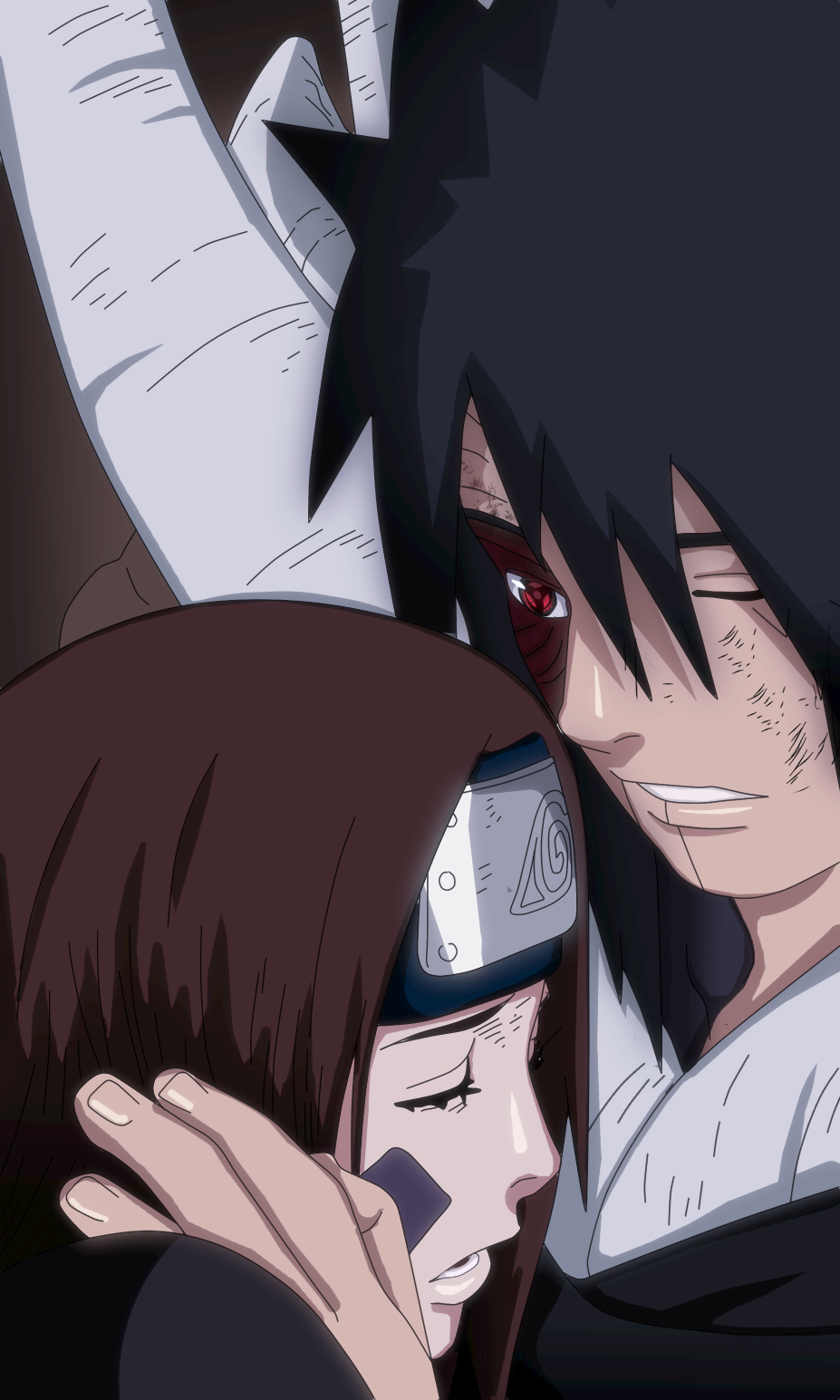 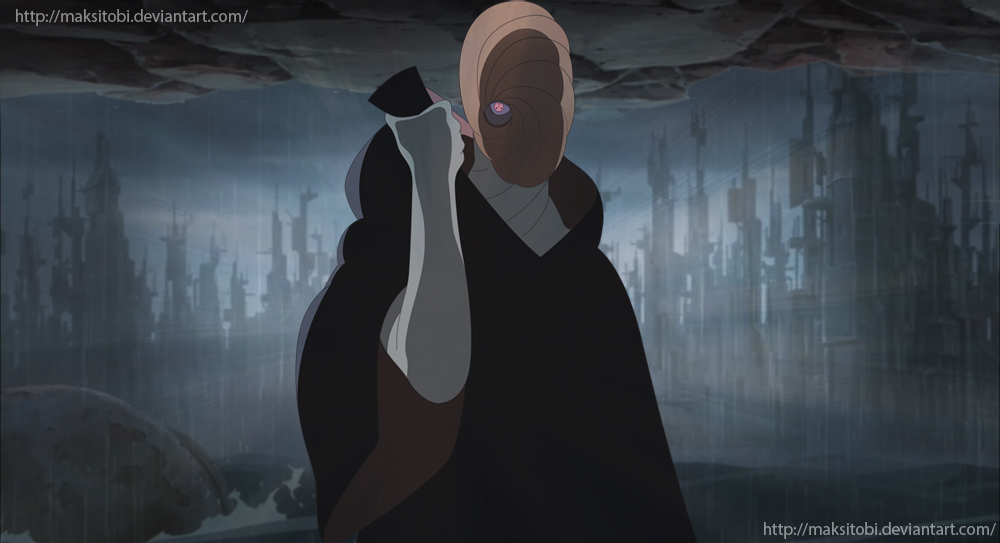 Naruto 606 finally reveals to us why Obito had turned over to help Madara in the first place, his desire to live and love Rin overruled everything in his life, even Kakashi’s rival-ship turned into hatred, his wish to create a new world in which Rin and himself are there turned his whole world upside down.

Naruto 606 starts out as the object in the sky in which Obito create now starts to crack and the people start to fall down. He starts to walk towards Rin, while thinking about what Madara had said. He remember specific sentences which Madara has said such as the fact that if there is Light, there will also be Shadow or darkness.

Madara looks at Kakashi’s body and completely avoid its. Obito now looks towards Rin’s body while she’s dead. Obito goes to touch her when he stops himself, before actually touching her a few impurities in her neck start to appear, it’s as though it reacted towards something. Obito is startled but doesn’t care.

Rin thinks of when in a dream, everything goes in the way you want but after being woken, everything changes. Obito touches her face and start crying at the fact that he never got to do such a thing. Obito brings himself to Rin and embraces her as he’s saddened, he says that he will create a world where she is alive. He then looks at Kakashi leaving him there as he’s unconscious. He promises to change the fate of this world.

He tells everything that happened to Madara, he laughs and says that he hopes no one saw him, Zetsu confirms that no one was able to detect him as he killed all the enemies leaving Kakashi untouched, he didn’t see anything. When the reinforcement from the Leaf arrived, they wondered at who annihilated the enemy.

Madara asks if he feels regret for his past teammate, Obito replies that he doesn’t care whether he lives or dies he couldn’t care less, Obito mentions that Kakashi will be in the world they’re about to create, and so will Rin. Obito asks Madara asks how one would create a dream world.

Madara smiles and tells Obito to come closer. Starting from today, Obito will be the savior. Madara enables his Genjutsu bringing Obito into a world where nothing but whiteness is. Madara tells him that they’re in his Genjutsu, he can create and control anything he desires within this Genjutsu world. If he’s connected to the Mazo, he can use its power and create anything, he shows Obito his more younger form.

At a different point in time, Obito and Zetsu are around looking for the Akatsuki, they lay their eyes upon Nagato who is described to have Madara’s Rinnegan, he had transplanted them on him when he was still a boy without him realizing it. Zetsu explains that Nagato is from the Senju Lineage thus he’s the only person besides Madara able to summon the Gedo Mazo.

Madara previously explained that when his life was nearly over, he had awakened the Rinnegan, with this he was able to break a certain seal, he was able to summon the Gedo Mazo from the stone it was sealed into. Madara has used Hashirama’s cells and the Gedo Mazo as a catalyst to activate and create Zetsu clones.

Someone cannot just activate the Rinnegan without first having both the Uchiha’s and Senju’s power. Obito tells Zetsu that they first need to befriend Nagato as Madara, they will gather all the Bijuu’s and then revive Madara with Nagato’s Rinne Tensei.

Madara has previously thought Obito all the Kinjutsu and Rikudou Jutsu, as well as the In’Youton Jutsu. After this point, Madara mentions that he had put his will inside one of the Zetsu’s thus turning him half of him black.

Madara then does a hand seal in which he removes a black pole from Hashirama’s body, he says that its necessary to bring Madara back, during the Rikudou No Jutsu. At this point, Madara starts to die, he tell Obito to go until he’s back. Nagato looks upon Obito within his Zetsu Suit. He asks who he is, Obito reveals to Nagato that he’s name is Madara Uchiha! Naruto 606 ends here.

We finally know most of what we needed to know about Madara and Obito’s past, I presume that this is the best time to get back to the War. That was certainly a great chapter, can’t wait for next week’s Naruto 607. It’s going to be another awesome chapter, stay tuned.