The latest issue of the Weekly Shonen Jump have given Bleach Brave Souls fans a taste of whats coming. The update features a brand new never before seen (maybe) form of Ichigo’s Hollow Form. WSJ features a Ichigo with long orange hair, dark clad-black clothing with red fur around his neck and hands. Talking of his hands, they are freakish-hollow, this can be seen below.

Update: Also confirming that the final arc of the Bleach manga series will also be adapted into the Bleach Brave Souls game! (thanks kurosaki-z) 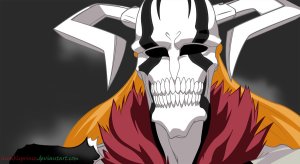 On top of the awesome form we’re getting for the Bleach Brave Souls game, I should mention that this form may have been seen before. If you don’t clearly remember the fight between Ichigo vs Ulquiorra based in Hueco Mundo, we saw Ichigo first losing, then getting his heart ripped out leaving nothing but a hole, but Orihime’s voice reached his soul which allowed Ichigo to go berserk and transform into what we see on image showing his full Hollow transformation.

But when Ichigo finally defeated Ulquiorra, his mask broke and he regained consciousness which can seen in the image below, this is the form the game seems to be adopting as it’s new hollow form, which is awesome.

So what do you think of this upcoming update to the Bleach Brave Souls game? Go ahead and comment down below telling us what you think. Personally I don’t play the game, but I would love to hear what some players think.