The manga issue of “Kuroko’s Basketball – Extra Game” has wrapped up by Tadatoshi Fujimaki. The Jump Next issue 1 of 2016 announces that this follow up manga sequel will be set to be adapted into an anime movie for all to watch in 2017. More news from the series comes with a trilogy of movie adapting the Winter Cup from the anime. 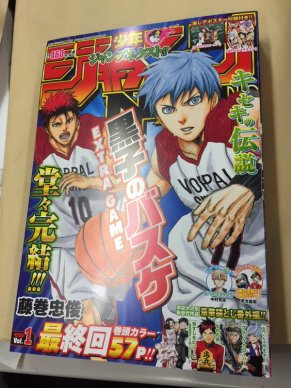 Kuroko’s Basketball – Extra Game follows the jouney of Kuroko Tetsuya, Kagami Taiga, Hyuga Junpei, Takao Kazunari and Wakamatsu Kosuke as they form their own team known as Vorpal Swords in order to avenge the Japanese spirit and battle against the American street basketball team Jabberwock.

I personally can’t wait for the movie to come out, I’ve not read this manga series but I am excited to watch the movie because the anime is usually really good and well done, so I believe the movie will be fantastic. Nevertheless, what do you think about this news? go ahead and comment down below telling me what you think.