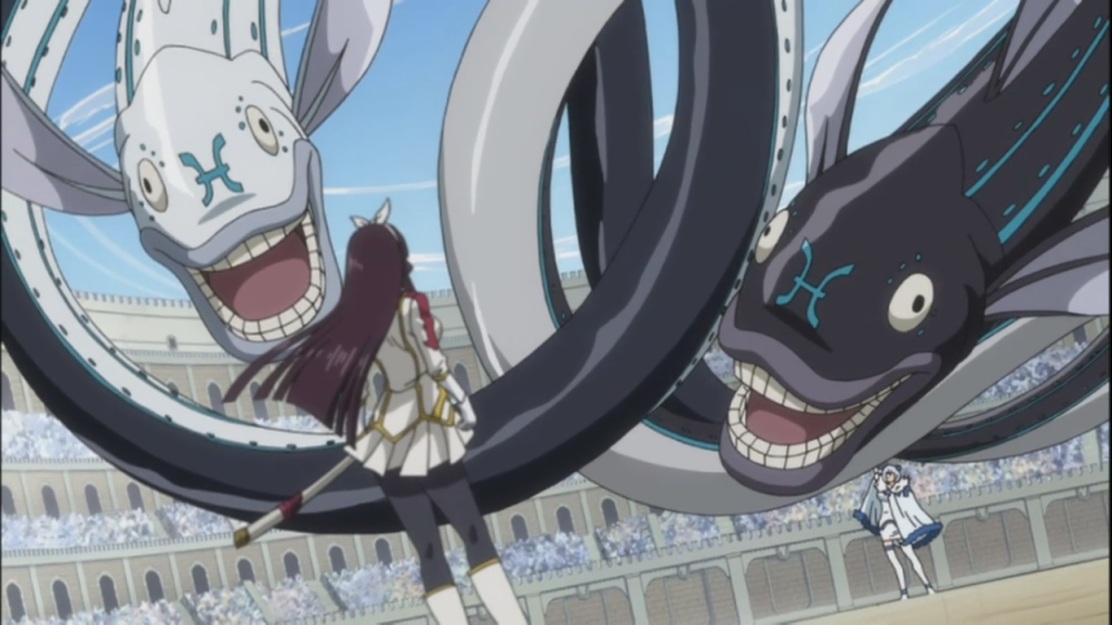 Fairy Tail 164 gets a lot more interesting as Kagura, the strongest Mermaid Heel members, shows us why she has such a title. She completely destroys Yukino as well as her Pisces and Libra. Even the 13th Key Ophiuchus! Arcadios is even more happy to hear that there are now two Celestial Spirits. Erza talks to Jellal, she also meets her old friend Millianna who’s part of Mermaid Heel! Yukino is seen to disgrace Sabertooth in Jiemma’s eyes.

Fairy Tail 164 begins after the bet was made. Everyone is shocked to see such a bet being made. Kagura tells her to get ready because she’s ready to receive any and all attack Yukino is going to provide her with. Yukino pulls out a Celestial Key, everyone notices this, Lucy, and Arcadios being most interested.

She opens the Gate of the Fish, bringing out Pisces to action. Two large fish, one black and the other white to represent the yin and yang of things. They seems to be floating in the sky. They both face Kagura and start hitting them when Kagura easily jumps and escapes all the attacks effortlessly. The king presumes that it’s going to be a good fight.

Yukino brings out a second key, this time she brings out Libra. She’s able to bring both of them out at the same time. Libra is first told to target her gravity onto Kagura. As she cannot move, Pisces is told to quickly attack, they do so but miss the attack as Kagura has escaped.

Libra is told to change her gravity sideways trapping her a type of stone statue. Pisces is again told to attack. While it goes to attack, Kagura quickly shows what she has to offer, she disables the attack and increases the gravity on both Libra and Pisces. It seems that she is also able to manipulate Gravity.

Kagura seems to have gotten both the Celestial Spirits as they’re now unable to fight like this. Kagura lands on the battlefield from the statue. Yukino prepares for her next attack when Kagura runs towards Yukino. She mentions the 13th Gate, one which is more powerful then the current 12 Keys. She starts to enable it when it gets misty. Yukino speaks, Gate of the Serpent Bearer, she opens the gate mentioning Ophiuchus!

As Kagura gets closer, she gets then covered with a massive snake which seems to be surrounding her. The snake type animal seems to be as large as the stadium. It’s starting to scare everyone. It gets closer to Kagura ready to attack, when it does this, Kagura quickly enables her magic and attacks Ophiuchus with her sword not even opened!

Kagura heads towards Yukino and tells her that she made a cheap bet. She doesn’t spare any moment, she quickly attacks and gets it’ over with. Yukino is shocked that she had lost this match against Kagura.  Kagura is announced the winner of this match. Everyone is impressed, especially Erza as she’s never met anyone like her before. Yukino is told by Kagura that her life now belongs to her!

Arcadios is happy to see a second Celestial Spirit Wizard, his plan can now go on as they both have 12 keys between them. However Datong doesn’t agree with what’s going on and wants to stop what ever’s going on. Jellal feels uneasy that there still hasn’t been anything yet, he discuss this with Erza. There could be a number of reasons to why it could have not been sensed.

Both Jellal as Mystogan and Erza go their own way. As Erza goes towards her house, she is met by someone unexpected, she’s met by her old friend Millianna! She reveals that she’s been in Mermaid Heel, while Sho and Wally went to do their own thing by travelling. At the bar, everyone is sleepy as they’ve drank so much. Members of Quatro Puppy are there talking to Natsu and the others.

Cerberus tells Natsu to tell Elfman that he wants a rematch. Levy notices that Lucy isn’t happy, she mentions that she’s just wondering what will happen to Yukino because she lost. The bar got more visitors, Lyon and Chelia visit them. At the Sabertooth HQ, we meet Jiemma (or Gemma depending on translations) where he’s unhappy to what had just happened.

He’s unhappy to see Sting lose, he gives him one more chance but he mustn’t do something bad or else he’s be punished. Yukino is up next. Jiemma throws grapes at her for not winning the match, plus she had made everyone put pity on the guild. Jiemma tells her to throw everything away which she agrees to follow! Everyone is having a fun time with everyone else during the night. Fairy Tail 164 ends here.

A good episode with a good ending to the day. Hopefully we’ll get to see some more competition as well as some great match up’s during the next day. Can’t wait for next week’s Fairy Tail 165, titled “Grudges Are Wrapped in the Silence of the Night!”, when Yukino is punished by Jiemma to strip as a punishment. Yukino meets with the others as well as get himself into the Sabertooth HQ to repay what they did to Yukino.