Naruto Shippuden 492 see’s Shikamaru getting captured, alongside Ro and Soku. Both Ro and Soku are turned and brain washed while Sai also helps Gengo try and brainwash Shikamaru to help him with his plans. While Shikamaru faces trouble, Ino, Choji and Temari appear and help him out. 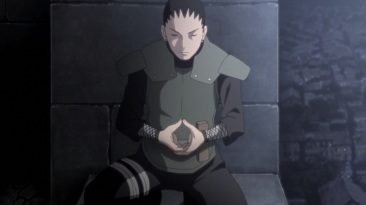 Naruto Shippuden 492 begins with Shikamaru waking up in a cell, he notices Sai coming in with some food and flowers on a plate. The village also seem barren as no one is present at that moment. All while Shikamaru plays shogi. Sai talks about how he’s eyes have opened and that Gengo has shown him everything. All while Shikamaru mentions that Sai is from the Leaf and that he’ll undo the jutsu.

Ro appears in another cell, while Shikamaru asks if he’s okay or not. It seems that something has happened to him. Soku is also facing Gengo, it seems like he’s manipulating her as he tries to activate another part of Soku within herself. Sai comes to get Shikamaru to talk to Gengo. They discuss the way in which larger villages do not want to deal with his village, thus he has taken things to his own hands.

The peace they’re talking about is through the Tailed Beasts, thus he wants one too. His arguments seems to points to war. However, Shikamaru is taken into a room full of flowers, to which he begins to smell the scent and see his vision blur. He realises that the flowers are what is causing everyone to become brainwashed.

He tries to attack Gengo but misses as his own moves are slow. He then realises that both Ro and Soku are behind him, they are those who were wearing hoods before so he didn’t realise. All this time, Shikamaru was being tricked into complying with his control, but it doesn’t work as Shikamaru escapes.

He then realises that he must think of a plan, he cannot leave here as it’ll be worse for his village, thus decides to stay and fight Gengo head on as he appears in front of him. He then faces both Ro and Soku head on, all while he tries to dampen the sounds from Gengo who tries to control him using his voice.

Ro is captured, this is when Soku attacks and scraps Shikamaru’s ears which dampens the sound. This is when Sai appears and Gengo escapes. He’s captured, he dreams of when he mentions to his dad that he didn’t want to become a Shinobi. However, at this point, Choji, Ino and Temari all walk in. Temari slaps Shikamaru for lying before. This gives Shikamaru a chance to chase down Gengo. Naruto Shippuden 492 ends here.

An ok episode if you ask me, if you really thought about the clues that the anime was giving, you could have easily predicted that the flowers were to blame. Plus next week’s Naruto Shippuden 493, titled “Dawn” will see Shikamaru facing Gengo.