Kubo Tite, the author of Bleach manga, ended the series this year with it’s 15 years of continuous work. The work put into creating weekly manga chapters is something that not everyone is capable of, it’s a very demanding job as it has a harsh impact on ones health. After releasing the final chapters and volumes, Tite Kubo re-joined Twitter this month, which he now has used it to share his story on the emotional story of ending a manga.

The translation below has been brought to you by Tenshi’s Cave.

[Note: Kubo quit twitter once in the past due to certain difficulties, but returned a few weeks ago.]

BLEACH ended 3 months ago. The feeling that there was still something he needed to do, was constantly on his mind. That’s why, firstly, he’d like to use twitter as a platform to say thank you to his readers. 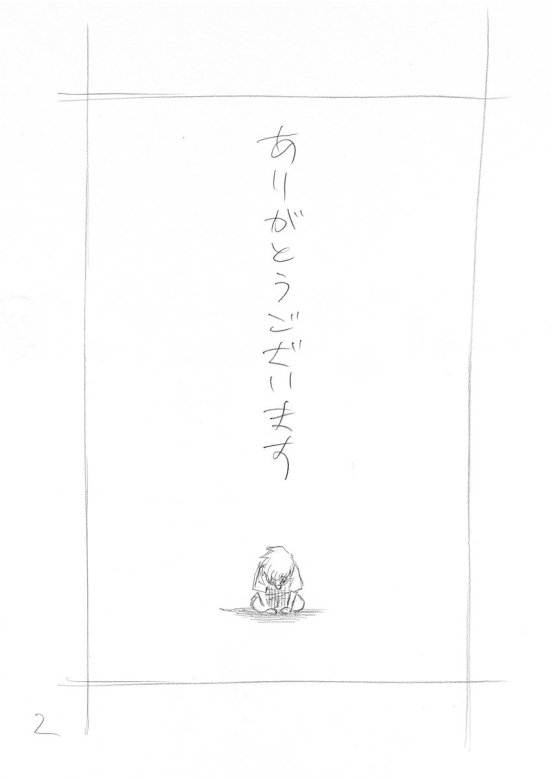 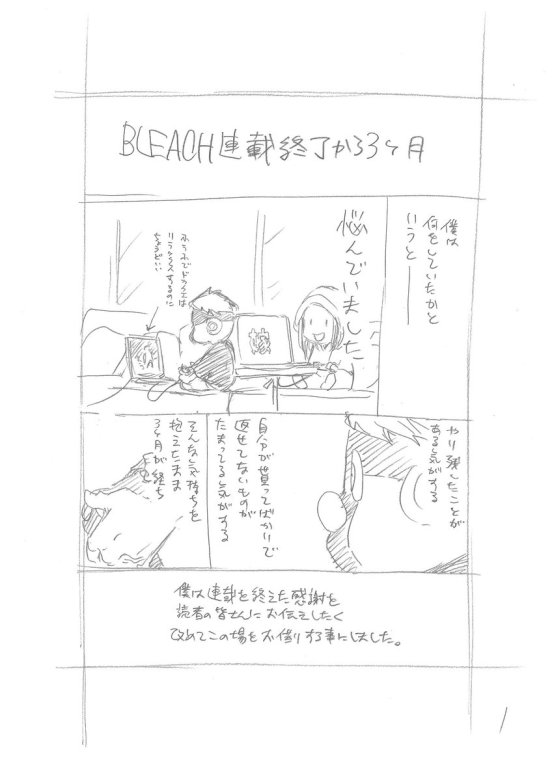 [Left image: Thank you very much]

This is all thanks to the readers. He has received ten thousands of fan letters over the years. From 3 year old children to 78 year old ladies. He has read and kept every single letter. They helped him push through whenever he felt like giving up.

But his health started deteriorating in the 10th year.

His doctor told him it was just a cold. In the past, he would get better in a day or so. But this suddenly changed. He’d be bedridden for a week. Whenever JUMP Magazine would have a double issue [and therefore be on a break the next week], he’d stay in bed the entire week to rest. But after a while, that stopped working too. Whenever he thought he was better, he’d get a cold again. No matter what he did. It was an endless cycle.

He felt pathetic. He felt he was failing as a mangaka. A mangaka is someone who delivers a manga with a set quality within a set time. So should he really continue the series? Should he stop? But the story is only halfway finished. What should he do? How should he end it? He thought about this every, every, every single day.

But then he got a letter. One letter. It had no name or address on it.

It was from a sick boy. His medicine had stopped working and he was now hospitalized, stuck in bed. He was unable to enjoy anything, because whenever he’d watch TV or play games, he’d be reminded of the times he had spent with his friends. He learned his sickness was incurable. If so, he wanted to die right away. But he was told to please live the days he had left: 18 months.

The boy wrote that he had decided to immerse himself in the world of manga as a way to enjoy his last days. He read various manga and ended up discovering BLEACH. The thought of “wanting to read the next volume of BLEACH” was the first time since his hospitalization that he had thought about “tomorrow”. BLEACH changed his world. BLEACH gave him life again. 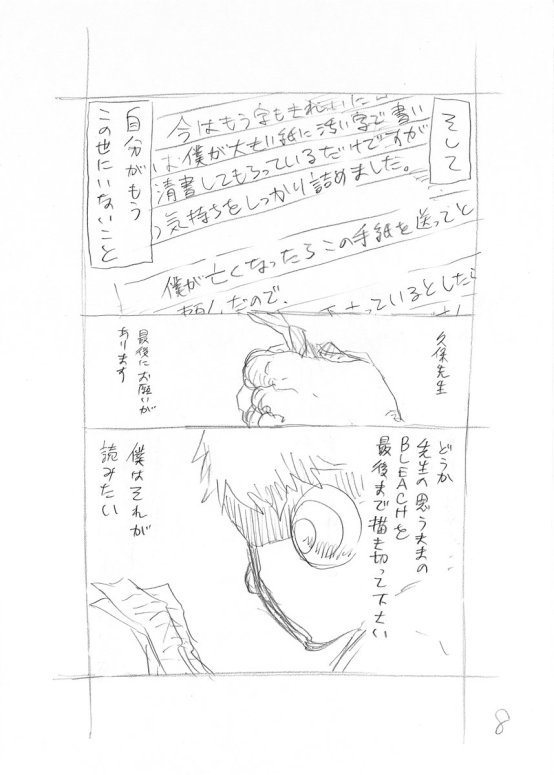 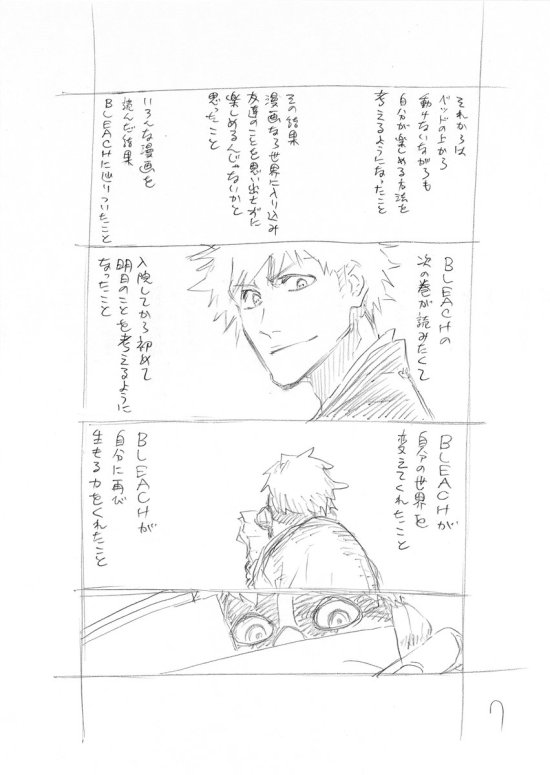 The boy had asked this letter to be sent after his death. In other words, the boy has already passed on.

The letter ended with the words: “Kubo-sensei, I have one final request. Please draw BLEACH the way you want to draw it, right until its conclusion. That’s what I want to read.”

Kubo has one request to the people reading his message. He asks for people to help him find out who wrote the letter. He understands this is a difficult and selfish request, however: “I want to express my gratitude towards him. Because, he is unable to read this thank-you manga.”

T/N: I know we can’t help him out because we’re not in Japan, but I felt this story is too beautiful not to be shared.

UPDATE: I re-read the tweets to double-check myself and it seems I missed one important line. I updated above with: “He says he managed to write BLEACH’s final chapter the way he had decided to after writing chapter 1.”

From this emotional story by Kubo Tite, I believe it to be one of the most powerful things to see yet, and I am VERY happy to see that Kubo ended the way he wanted, especially since it was already decided back in chapter 1.

What are your thoughts on this? Go ahead and comment down below to tell me what you think.

Further to this, if you’d like to look at the tweets yourself, be sure to go ahead and look up the tweets down below.