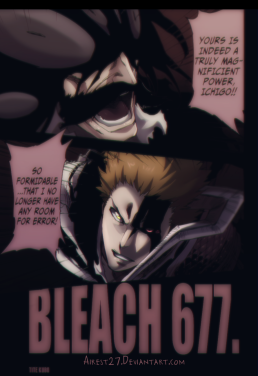 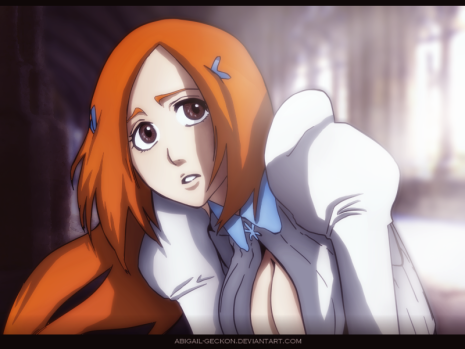 Bleach 677 begins as Yhwach is hit by the Gran Rey Cero which was mixed in with his Getsuga Tensho. Yhwach mentions that the power he used suits him very well. However, as Yhwach mentioned below, he is out his of league. Yhwach holds onto the attack and throws it back at Ichigo, it misses him.

Ichigo attacks but Yhwach blocks, he mentions that he can read Ichigo like an open book. Yhwach predicts what Ichigo might be thinking, which is that Yhwach might be underestimating him, which means he won’t be using is true ability, or know the full extent of his Hollow ability.  He needs to seize the opportunity he has now.

Ichigo’s logic was good, but he no longer will be able to do anything as Yhwach powers up and uses the power he gained from the Soul King in order to cover himself with the eyes. Yhwach mentions that his power is truly magnificent, so powerful that he no longer has any room for error. Orihime watches as both Yhwach and Ichigo clash over her.

Ichigo and Yhwach attack one another, out of nowhere Ichigo brings out his second sword, and so does Yhwach. Ichigo steps back after being hit by the sword, he lands on the ground, but Yhwach had already set a trap which sticks through Ichigo’s left foot. Ichigo then jumps up landing onto the wall behind him, but another trap was set which damages his right foot.

If this is true, then the next attack, should not attack him. Ichigo tries to go for an attack, but Yhwach had already stepped in and attacks. Seems like the attack didn’t land. Ichigo steps back as he thinks that there is no possible was that Yhwach can see everything, if he could actually see everything, then he wouldn’t have had to block any of his attacks.

There has to be some kind of limit to his ability, he has to find out what it is. Yhwach knows that Ichigo is looking for his blind spot in his abilities. The future can be changed, if he’s capable of growing and maturing during a fight, then the future he saw shifts into a different future. Ichigo holds on to a position as he begins to think, if Ichigo thinks like this then he will truly be defeated.

Ichigo stands still only for a second, out of nowhere black dagger like attacks which previously attacked Ichigo’s feet, attacks Ichigo’s left shoulder. Ichigo falls to the ground after he notices that the attack appeared beneath his feet and pierced through him.Yhwach mentions that Ichigo made one fatal miscalculation, the future as he sees doesn’t now have one single road.

The future diverge from a single point in time like a countless grains of sand scattering in the wind. Each and every individual grain of sand would be considered a possible future, meaning that they are potential possibilities. Yhwach then begins to talk about the subject of “hope”, it is one of things which means that Ichigo shall hope to grow and mature during battle.

But the truth is that changing the future means nothing more than moving from a grain of sand to another. Yhwach mentions that he has the ability to watch over all of them, he can see every single last grain of sand clearly. Ichigo is told to not abandon his hope. Humans thus call them hope due to the fact that it’s jumping between these grains of sand depending on fate and possibility.

Yhwach tells Ichigo not to despair, there is nothing more gut wrenching for a parent than to kill a child who has lost themselves in despair. Ichigo mentions that what of despair, he knows it all too well because up until now, he’s climbed up, kicked in its teeth, surpassed it to make it to this very moment. Ichigo then enables and releases his Bankai! Bleach 677 ends here.

A fantastic chapter, a little bit long in terms of chatting and conversing, which is always awesome, but it’ll be awesome to see any new changes Ichigo might have had to his Bankai as he’s not mixed his Quincy and Hollow abilities. Can’t wait for next week’s Bleach 678, it’ll be awesome.