Naruto Shippuden 464 see’s Hagoromo telling the Hokage’s who have died his journey along with the journey that his son’s Indra and Ashura faced during the birth of Ninshu. This is all leading up to the fact that Naruto and Sasuke are currently fighting. We see Hagoromo meet different people, along with fixing a number of bridges along his journey to bring everyone together using chakra. 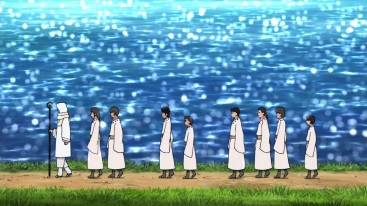 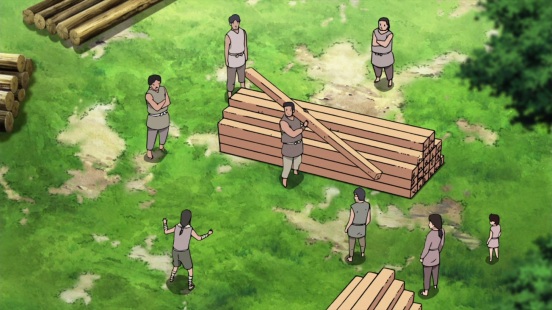 Naruto Shippuden 464 begins as Hagoromo has decided to do two things, to put all the tailed beasts somewhere they will belong, as well as the recover the land that the fight took place in. Gamamaru mentions that he saw a dream whereby a blue-eye boy will get to know all the names of the nine beasts, he dreamt that he will call forth a miracle.

Hagoromo questions his journey but Gamamaru mentions that he should go in his journey. He firsts follows a river where he finds himself a broken bridge, someone there asks him what he’s doing, to which he asks if has anything he wants to transport to the other side, he can do it. Hagoromo see’s through him and mentions that he is causing a hardship for everyone, he nearly even cons someone who cames there.

Hagoromo begins to remake the bridge with all his powers, by breaking down trees and turning them into logs. He works continuously through the heat, a storm, even in the rain. The man is frustrated and thus Futami (the man) gives him his help and effort. The next day, they begin, the nearby village watch on, they also get in as the bridge is half done.

They all mention that they shall help. The bridge is done, Hagoromo mentions that Futami has done a great thing, and thus he shall go on his own journey. Futami mentions that he wants to follow him. Later at night, Futami asks who he is, Hagoromo himself doesn’t know, he decided not to use excessive power, he wants to be able to use his own power to help others.

Futami decides to follow Hagoromo so he can make something of his life. Hagoromo thus decides that he shall use his own powers and chakra to connect everyone. Next day, they get to another bridge and rebuild that. They eventually gain many followers as he introduces them to Ninshu, the Ninja Creed which allowed him to connect everyone using chakra.

He scattered all the beats, even asked his followers to spread his following. Hagoromo even grew old as he was saying goodbye to all the beasts as well as for them to learn their full strength. He later returned to his own village to give birth to Indra and Ashura, where evil forces (Zetsu) was already watching over them to take advantage. Naruto Shippuden 464 ends here.

A pretty good episode, seems like we’ll get a few more as Hagoromo will go ahead to explain everything about Indra and Ashura and their own creed and powers that they’ve developed in next week’s Naruto Shippuden 465, titled Ashura and Indra”, should be awesome.