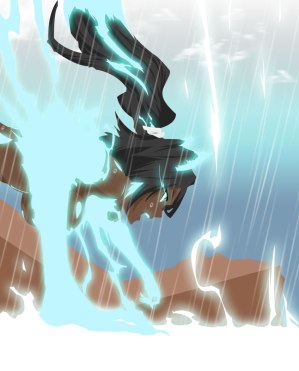 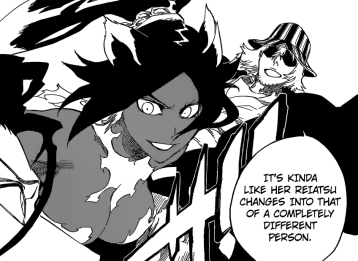 Bleach 663 begins with an astonished Askin as he doesn’t know what’s going on. Yoruichi releases her Shunko Raiku Senkei, Shunryu Kokubyo Senki or rather called the Flash God Black Cat Warrior Princess. It’s her name when Urahara gets a little involved, Askin asks if she even comprehends their language, this is when he smiles and Yoruichi attacks.

It cuts Askin as he’s sent back, Askin begins to run away as there seems to be no clear explanation to why she can attack him. Urahara appears and tells him that it’s because of her mood. Due to how cats act, they have moods, and since Yoruichi herself has a lot of moods, being in this form enhances this. At one point she doesn’t even attack him because she’s not in the mood.

However, this means that her reiatsu is really unstable. It also mean that her reiatsu is completely different and thus she’s a different person. She attacks Askin again. Urahara explains this with the mention of influenza, that it occurs every year. Every year, the strain changes, even if it’s a little change. It thus allows for the flu to attack an individual.

In similar fashion, it’s how Yoruichi’s reiatsu works, it’s changed a little and thus Askin has to build immunity all over again. Askin is able to get immunity very quickly, and this happens after receiving an attack. However, with Yoruichi’s current form, we see that Yoruichi’s reiatsu changes 48 times per second!

At the same time, Yoruichi gets a vital hit onto Askin. Urahara then calls over Yoruichi, and like a cat, she arrives, gives him a hug and licks his face. She naps on his knee for a little while, however it seems that the effects of the immunity is wearing off. Thus Urahara mentions that he’ll go and look for the body of Askin and that he’s enjoying an eternal slumber.

However, a large ball appears out of nowhere when we see Askin appears, he mentions that the ball they see is the largest poison ball he’s capable of making. On top of which, Askin mentions that Urahara is probably more interested in the new form Askin is in, his Vollstandig. He calls is Hassein, or rather God’s Poison Taster (relations to Apostle). Bleach 663 ends here.

A fantastic chapter indeed, Bleach never stops surprising me. The fact that Urahara will not face against Askin means that something awesome is about to go down. It also means that we’ll most likely now see Urahara’s Bankai soon! Can’t wait for next week’s Bleach 664, it’s going to be awesome.