Fairy Tail 470 see’s the defeat of the great members facing God Serena, however Acnologia appears which completely destroys and cuts through God Serena just with one attack. Seems like God Serena and others will face Acnologia. 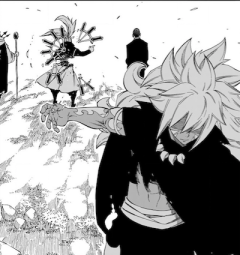 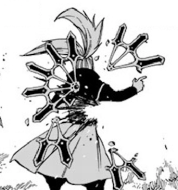 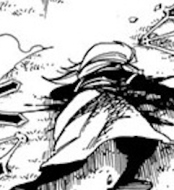 Fairy Tail 470 begins as God Serena has the other Wizard Saints on the tip of his finger tip, they are on the ground as God Serena say’s his good-bye to them.

Warrod mentions that they were once companions, when Warrod uses one of his trees to attack God Serena. The others Wizard Saints follow his lead in attacking God Serena.

However, God Serena has eight ‘Ryuma’ crystals which the others have not seen, and thus uses them to attack the others.

The four fall down on the ground as God Serena, August and Jacob all walk towards them. However, out of nowhere God Serena is hit by a roar.

This roar came from Acnologia who appeared in his human form, the roar prevented God Serena attacking Warrod and others.

However, right after it, Acnologia uses this advantage of absolutely obliterate God Serena’s body as he crabs a chunk out of it, leading to God Serena’s demise, he falls to the ground in his pool of blood.

What a fantastic chapter, it seems that Serena is down for the count along with his previous friends. August and Jacob are left for Acnologia to play with. This is going to be interesting. Fairy Tail 471 is titled “Until the end of the Fight”, seems like it might be a 26 page special. Spoilers from folks at MangaHelpers.

What do you think? Comment down below on these early spoilers, the chapter will be out tomorrow, most likely.