Bleach 657 see’s Yushiro return to the screens as he joins Yoruichi to fight against Askin Nakk Le Vaar. On top of which, Yoruichi allows Orihime, Chad and Ichigo to get back up and carry their mission on. Askin gets a lethal dose of both Yoruichi and Yushiro’s techniques giving him the upper hand. 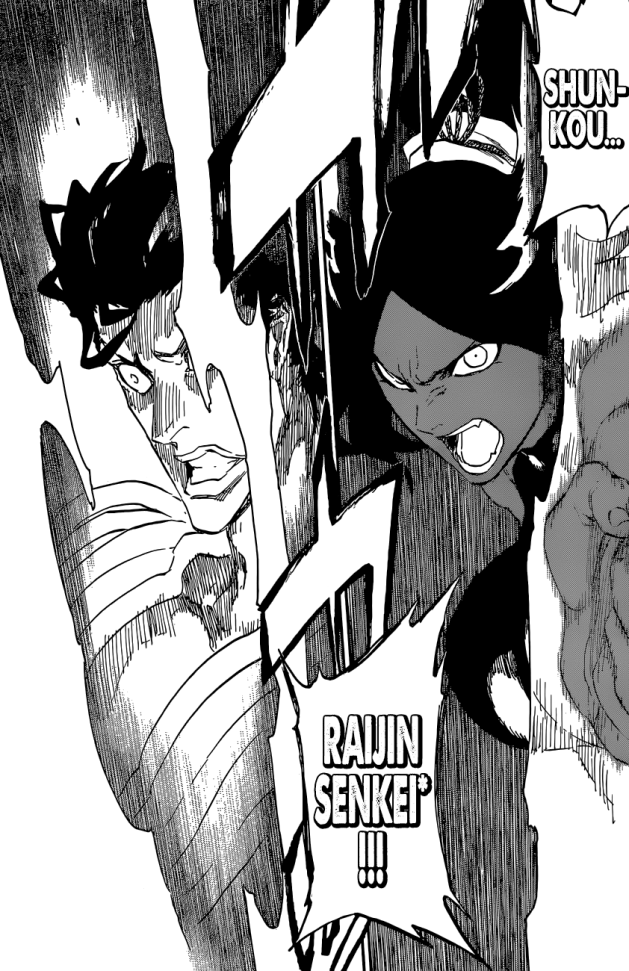 Bleach 657 see’s the attack from Yoruichi directly attack Askin, all while Yoruichi aids Orihime in getting her to heal herself all while then aiding Chad and Ichigo once she is ready. However, out of nowhere, Yushiro appears as he tries to hug her. She quickly asks why he’s here, mentioning that he should be with Kisuke and others.

However, he mentions that as they already have a bunch of Captains with them, there is no reason for them, so he leapt into the fray where she was, in order to rescue her. She gets pissed off because of what he said. However, Yushiro begins to cry as he mentions that he’s certainly become much stronger.

Askin mentions that they’re getting away, and that he’ll definitely get an earful from Yhwach, however Yoruichi mentions that he won’t have to since Ichigo will take care of him. Yushiro mentions that it’s called the Thunder God and that he shouldn’t make fun of Yoruichi.

All when Askin thinks that he’s a girl, all when Yushiro gets pissed off as he charges upon Askin and smacks him in the face. He’s seriously strong, he even makes him bleed. All while, Yushiro mentions his rank and then unleashes his Shunkou Bakuen Musou (or Unparalleled Combustion) which causes a large explosion.

It seems that Yoruichi respects Yushiro for his rank and how quickly he’s grown and how strong he is now. Yushiro takes this as a positive. Askin appears, he’s electrocuted and exploded, so now we see that he’s gotten attack by both to a critical level. He then mentions that as he has their reiatsus, they can no longer kill him. Bleach 657 ends here.

A brilliant chapter, and it’s fantastic to finally see Yoruichi and her little brother, Yushiro taking part in this battle. They’re will surely have to fight to the maximum seeing as how badly Askin Nakk Le Vaar will take them. Brilliant chapter, can’t wait for next week’s Bleach 658, when this awesome series continues.