Bleach 646 see’s Lille Barro vs Shunsui as their battle continues onto the next stage when Shunsui tries to cut through Lille but fails when Lille’s second eye activates giving him a second chance, he then enables his Zyrael which allows him to go on ahead and get a few hits on Shunsui, have these hits really done some bad onto him? 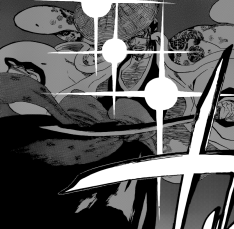 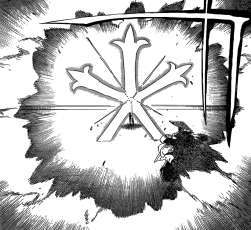 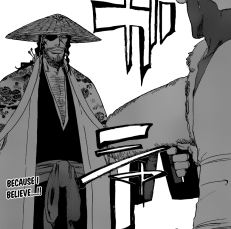 Bleach 646 begins with Shinji and the others talk about how they should either move on or not, while Nanao just tells them to go on ahead as she will go back. Shunji mentions that Ukitake would just say that he’ll be fine, if he was there. Even Yamamoto would would do the same thing, all because he’s the Captain Commander, as to shoulder the lives of his men.

Shunsui and Lille battle on as Lille mentions how he could even scratch him with his power. Shunsui mentions that he’s already done so as Lillel’s gun falls apart. He wanted to take that whole arm away from him but he guesses that he’s been a little soft. Lille backs off and then remakes his gun.

He mentions that his gun is his bow, and thus he makes it using reishi. This is the reason why Lille is able to still battle even if his bow is broken. He backs up a little, when Shunsui mentions it seems like he’s forgotten the rules as Shunsui appears behind him and tries to cut him.

If he loses sight of him, even for a second, the image he’ll see after him could or could not be him. Shunsui then jumps while making many shadows appear appear above Lille as he mentions that children are afraid of the shadows. Lille gets stabbed by Shunsui, he looks up as both of his eyes open.

He mentions that it’s the third time, when he has both of his eyes open, it becomes possible for him to use the X-Axis’ power, meaning that his gun would be able to pierce through him and and his body. Shunsui tries to clarify this by mentioning that when both his eyes are open, everything goes out the window.

In this moment, within this world, there is no weapon that can kill him. As a a result of him dying from a danger situation, he can open both of his eyes and cheat through it. Shunsui then tells him to hurry up and close both of his eyes then. Once he’s opened his eyes the third time, he can complete his fight with his eyes open.

He is the final Quincy granted by his Majesty, calling himself his Majesty’s greatest creation. After being put in such a vulnerable state three times, there is one thing that never should be allowed to be happen. Lille begins to transforms as his eyes change and thus displays the Quincy sign.

Lille transforms into a completely new being as he grows 8 wings with three holes in them as well as changing the form of his body, becoming slimmer and much different. Using the three holes, he is able to use an attack which renders Shunsui immobile and is able to get an attack on him. Bleach 646 ends here.

A fantastic battle that continues on to even more awesomeness as it seems that this new form of Lille’s will most likely mean Shunsui will have to power up his Shikai or reveal his Bankai to some degree or something. Can’t wait for next week’s Bleach 647, it’s going to be awesome.