Fairy Tail 450 see’s love between immortals flourish between Mavis and Zeref as they seem  to have fallen in love after realizing that they’re the only two people who can live with each other. However, after Zeref kisses Mavis, she falls into deep sleep even if she’s immortal. 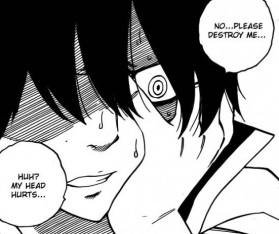 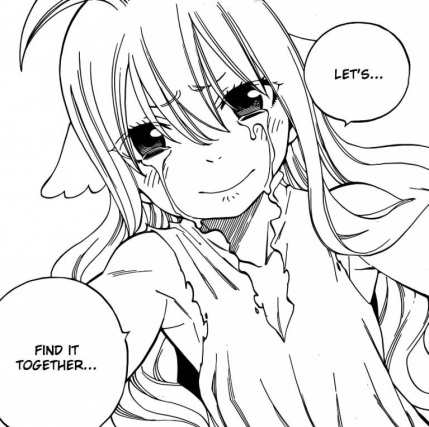 Fairy Tail 450 begins with the birth of Makarov, everyone realises that it’s such a beautiful child. Rita asks Mavis giving a name to the boy, she decides on Makarov. A name from a prince from a book. Rita begins to sweat more and more, as she begins to lose her life right in front of Mavis.

Everyone realises this as it seems that she’s used too much energy during child-birth. Mavis remembers what Zeref told her, about when she holds life close to her, everything begins to get destroyed. Yuriy begins to scream telling Rita to wake up.

Mavis screams and runs out of the guild, time after time she realises that she was the cause of her death. She caused the death as well as destroying life around her within the forest. It seems that she’s now realized the curse of contradiction has been activated on her.

After time, she’s been travelling aimlessly, she’s been out of the guild for a year where she’s travels and has somehow managed to kill a few people. Out of nowhere, she finds Zeref. She looks terrible, as she’s not eaten in half a year. Zeref mentions that the Ankhseram curse is bad that even if she beheaded herself, she won’t be able to die.

Mavis asks of Zeref to kill her, when he mentions that he can’t eve do that. Same goes for him. He mentions that he was like her once, unable to die even if he wanted to. But along those lines, he’s learnt to look at things a little differently now. They have an infinite amount of time, along that time.

He’s created demons and given them the power to kill him. He’s also making himself a country, he’s taking it as a game so he could use them just as pawns, thus he doesn’t seem to just kill them. Zeref mentions that he’s preparing for war, although he hates war, he’s expanding it for a reason.

Mavis checks hows he’s being changed by the curse, his contradiction. The world refuses to accept him. Mavis quickly hugs him and mentions that he’ll accept him. The only one that understands how he feel is her. She tells him never to give up, thus they’ll find a way to break the curse, doing this together.

Mavis and Zeref hug, when he mentions that she’s the first one to treat him like this, they face each other as he kisses her. Everything begins in the deep abyss of magic. From love to sadness, it’s something that can be of both sides. Even the love between two can by affected by the curse, have the highest level of contradiction.

The more one loves, the more one will take away from another, the curse has thus now taken the life of Mavis from her, even if she’s supposed to be an immortal, she is endlessly in a sleep. Fairy Tail 450 ends here.

A fantastic chapter covering the past of both Mavis and Zeref, from sadness to love. Their story just keeps on growing to something which is very significant. I honestly, can’t wait for next weeks’ Fairy Tail 451, titled “Fairy Heart” when we finally find out the truth behind Fairy Heart.