As part of the 30 Day anime challenge, this post covers day 4 which is to figure out who the best female character is depending on the anime’s I’ve watched. Honestly, choosing a male counterpart for this question was quite easy, while the female version was quite hard, I’ve had to ask a few friends for some advice on this.

Out of the question I’ve currently done, I think this one has been quite hard, not in terms of the character, but the fact that I don’t really have a best female character. I just usually go through anime’s and don’t usually pay a lot of attention to female characters. If they’re doing a good job in helping progression of a series then I can agree with them.

To begin with, lets talk about a few characters which I considered to for this post. From the anime Bleach, we can talk about characters such as Orihime, Yoruichi, Soifon and so one. I feel that Bleach is a male dominated series that has quite a lot of strong female characters, however from I don’t quite think that they could be a favorite just yet due to their nature of being somewhat secondary characters.

Naruto has a grand number of amazing and strong female characters such as Sakura, Ino, Hinata, Temari and so on. I think that Naruto compared to Bleach has a lot more females to male ratio compared to that of Bleach. A lot of the characters are amazing and have their own special aspect which makes them amazing.

From the anime’s Bleach and Naruto mentioned. Fairy Tail, which is my is currently a favorite has a character which I think is amazing that she could receive this favorite. Fairy Tail has a number of amazing females such as Lucy, Wendy, Juvia and Mirajane. However, the one that I highly think is capable of getting a favorite from me is Erza Scarlet. 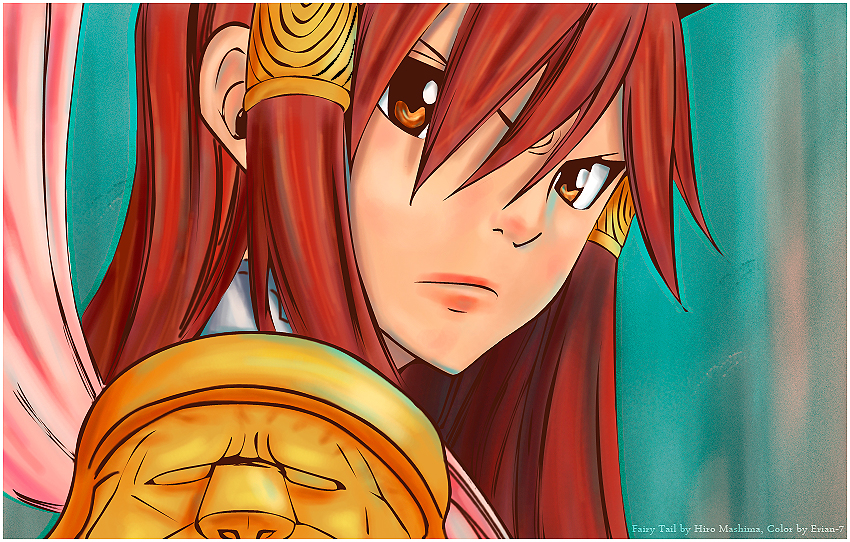 Erza Scarlet has the power to transform her clothes into that which are either armor or have the ability to allow her to fight freely. She also has the abilities keep Natsu and Gray under control as she can really kick their asses if they get out of control. While being as strong as she is, she is also majestic in that she has the power to fight any enemy, for example Minerva or Kyouka in the latest episodes.

She also nearly became the master of Fairy Tail when Makarov had disappeared while bringing the guild back together. She clearly has the abilities to keep everything and everyone in check when it comes to battling it out against the enemy. And even if she’s defeated, she has other people who can jump in and taker over to battle and keep her fighter spirit up.

So, who do you think is an amazing female character in the anime world? Go on ahead and comment down below telling me who it is.