Seraph of the End focuses on the battle between Vampires and Humans when a mysterious virus appeared on Earth which infected and killed everyone over the age of 13. Whilst this occurred, Vampires appeared from the dark and enslaved humans. Yuichiro Hyakuya was enslaved along with children from his orphanage and treated like livestock for blood. Let’s begins our Seraph of the End review. 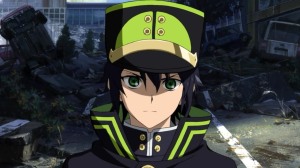 Following the story of Yuichiro Hyakuya throughout the 12 episodes, we see his view of point as well as build up his character fleshing out to the type of person he’s grown into. After escaping from the vampires, with the help of his friends who were also captured, he makes it out and encounters Guren Ichinose who helps and trains him to become a great soldier, they use demon weapons in order to kill the vampires as standard weapons don’t do anything to them.

I believe there will be a second season coming out in August 2015, so I’ll definitely keep a look out to see how it stacks up to the first season. Initially I thought the concept and story were amazing, Humans vs Vampires is something I’ve not seen a lot in anime’s so it’s good to see it happening here. 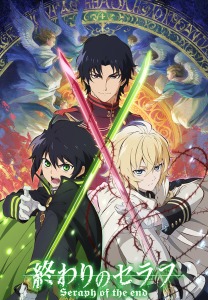 The start of the series was what I really liked, it had a lot of suspense and had that creepy and scariness which I wanted in this series, however as we develop and only concentrate on humans, we learn that there isn’t a lot here except that the main protagonist just wants to fight and kick ass.

Furthermore, as he does get a hold on a cursed weapon to kill Vampires, we see that he’s just going to be an over powered character with something that’ll make him extra special that he’ll just use and kick ass after ass. The standard where the protagonist once again has some special power that will be used to kick ass.

We learn that around 5 to 10% of Yuichiro is non-human, something that creeps up at the end of the series and explodes into something big and also a surprise which was bound to happen. I have not read the manga, however I expect that it would represent this 5 to 10% non-human within Yuichiro in a better manner compared to what we got.

As the story develop, we set ourselves in a school setting which makes it hard to believe that the world is in fact in a post-apocalyptic setting, minimizes any sense of danger and threat that was built in the first few episodes. We follow Yuichiro in his efforts to join and become part of the Moon Demon Company, group formed to fight against vampires.

After the adults died, and Yuichiro trained hard and grew up, the world seemed to have calmed down a little however the threat was definitely there. There was more character development in these 12 episodes then actual fights between the vampires and humans.

The art in this series was okay, it was extraordinary nor was it crap. The settings used for the outside world, seeing torn down buildings and built up plants in urban areas were not so bad. The animation was also okay, it wasn’t anything great that would hook you, nor was is terrible.

With only 12 episodes to introduce and hook users, it did some of that job, it was extremely amazing, but it did an okay job. So for that reason, I think I did enjoy the show to an extent, I’ve also heard that the second season has much more of an impact on the anime, it has many more fights and lots more development on the series.

I score Seraph of the End (Owari no Seraph):

So what do you think? Have you been watching this series over the past 12 weeks? If you did, go ahead and tell us what you think? Let’s talk about this series if you enjoy or if you didn’t quite like it. Use the comment section down below.