Fairy Tail 409 sees Natsu and Gray get beat up and dragged by Mard Geer whilst Jiemma faces Sting and Rogue who unleash their White and Black Needle defeating Jiemma. Jiemma boats about how strong Sabertooth was, however Sting and Rogue begin telling him that his ways were wrong and that Fairy Tail was always the strongest. 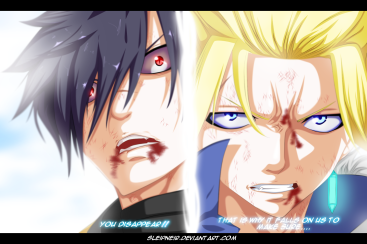 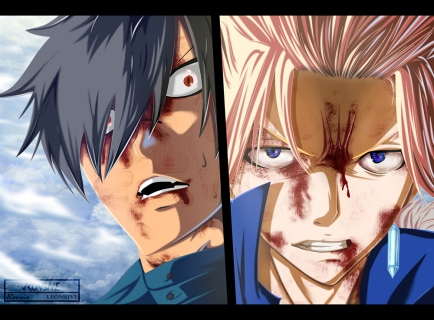 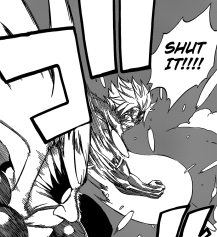 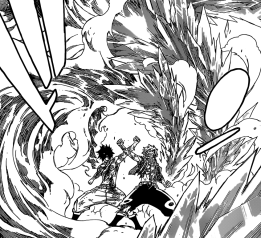 Fairy Tail 409 begins with Gray and Natsu both attacking when he opens his wings and launches his thorns. Both Natsu and Gray defeat those however Mard just holds onto their heads and fly’s up. He scrapes them onto the walls, mentioning that he will definitely kill them.

Jiemma attacks Sting and Rogue as they try to hit back. He also reveals that Minerva was of no use to him, with all the power she received, she was worthless. Sting punches him, it doesn’t do anything however Jiemma punches back and punches both of them down.

Jiemma talks about how they’ve ruined Sabertooth while Sting and Rogue talk about how they’ve found how a guild should run. They talk about starting over, making sure that they start good ground on how it should run, all the strength in the guild being shared and not just individuals. They even mention that Fairy Tail is an example of a very strong guild run on the power of friendship and love.

Sting and Rogue scream mentioning that they will break his idea and use their white and black needs, White Shadow Dragon’s Rogue Silk as they scratch through Jiemma ultimately defeating him using their beam of silk light. They also fall to rest, leaving it all to Gray and Natsu.

Natsu and Gray are still getting scraped over the wall, when they quickly get up and grab onto Mard Geer and use him and use their absolute power to try to defeat Mard Geer. They smash him into the wall. Fairy Tail 409 ends here.

A great chapter, it seems like Gray and Natsu look a lot stronger than they actually are because they are seriously proving everything wrong. It seems that even being hurt doesn’t hurt them, can’t wait for next week’s Fairy Tail 410, titled “Memento Mori”.