Bleach 583 electrocutes everyone as Candice enables her Vollstandig as she quickly begins her lone attack on Ichigo with all her might and anger, using her powerful attacks don’t seem to do a lot as Ichigo’s power surpasses all of them. Ichigo goes a head to use a new ability called the Getsuga Jjuujishou (or Juujishou) in which he creates a cross using both Zanpakuto’s in order to enable its true power to attack and win. 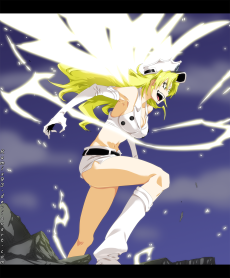 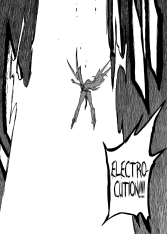 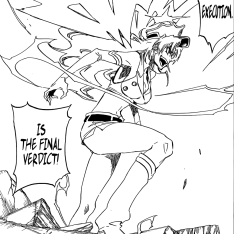 Bleach 583 begins as all the girls attack with their personalized arrows to which they all hit Ichigo head on, from the power it had unleashed on Ichigo, it seems that it was all repelled as Ichigo was able to uses its power to push all the girls out. Candice shouts at them if they’re doing this shit on purpose, as she wants to beat the living crap out of everyone.

Liltotto mentions that they haven’t eaten in forever, thus firing all these Holy arrows at once won’t pack a punch. They all mention that it’s getting annoying and that Ichigo should just die, to which Liltotto also agrees. Candice quickly enables her Vollstandig to which she mentions that she’s ready to call her final verdict.

Candice mentions that they mustn’t act like fools, they need to win for his majesty. She tells all of them to sit back and watch her take care of Ichigo, to which she will destroy Ichigo and thus allow for Juha Bach to grant her any wish she desires. Candice fly’s towards a smiling Ichigo.

She has two lightning like objects to which she uses as swords to attack Ichigo but he blocks. Ichigo mentions that she’s dual wielding, to which he’s also happy that he’s doing the same. Candice shouts at her mentioning that she’s actually sextuplet wielding. She pushes Ichigo back and throws one of her arrows.

Ichigo makes a mark in front of him to which it looks very familiar as he uses his Getsuga Tensho to which it blocks the attack from Candice. She gets even more pissed to which she powers up mentioning that he hasn’t seen anything yet. She gets ready into a pose to which then swings her hand towards Ichigo to enable her large scale electrocution technique.

Ichigo moves towards her to which he does the same by creating a small Getsuga Tensho, however this time he swipes from the top to create a cross, to which it is incredibly used to block the attack from Candice. He uses both blades to create the Getsuga Jjuujishou (or Juujishou depending on translation). Bleach 583 ends here.

A fantastic chapter, however I’m surprised to see Ichigo going easy on these girls. I guess he doesn’t want to pummel their faces in, and supposedly wanting to see how their powers work to which he could use against another opponent. Nevertheless, I can’t wait for next week’s Bleach 584, to which the battle will continue!