Bleach 565 shows the past of Juha Bach (Yhwach) including how he was born and the unique ability which was given to him. We learn that he was not able to speak or do anything, however he has the ability to distribute his soul, when they died he has able to gain their gained abilities. Juha Bach also hands out even more powerful parts of his soul to Stern Ritter to use. Many who have already touched Juha Bach or the Stern Ritter’s already share part of Juha Bach’s soul, even the Shinigami’s. 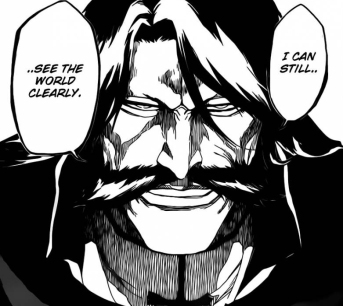 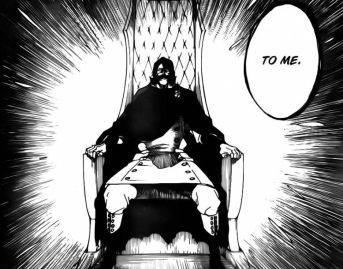 Bleach 565 begins by describing a baby which couldn’t see, hear speak or move. The baby couldn’t do anything, he had nothing that could help him survive, yet he wasn’t scared. He didn’t cry because he didn’t have a throat to speak with. Even if he had been able to use it, he probably wouldn’t have cried either.

The baby knew that even though he had nothing to survive with he still would survive. The people around him treated the baby like a treasure because they had realized that if they touched him the missing things within them would become complete. The lungs of people with lung diseases healed, the hearts of the lonely had healed. The cowards would find courage, even those with missing limbs would gradually reform.

The baby had the power to distribute his soul to others. When someone touched the baby, they would gain a piece of the baby’s soul. And the wounds that wouldn’t be able to heal would begin to heal. When the person’s wounds healed, the persons gained knowledge, skills, what they earned with effort and talent would all be written within the piece of soul received from the baby. Once the person had died, all of that would usually go to the baby.

The ones who touched the baby didn’t last and have a long lifetime. Some had a few years, months or even just days. Nevertheless, people kept gathering around the baby. Every time one of the pieces of soul went back to the baby, he would be able to gain that ability, such as movement and sight.

We see Juha Bach mention that James seems to have died and has come back to him. We then see Uryu going into Juha Bach’s room when Jugram appears, asking him what he’s doing there. Juha Bach is sleeping and it’s the only time when he can become the Father of the Quincy and store his power.

No one is allowed to disturb his sleep. Uyru is asked again what he wants to ask. Uryu mentions that he shouldn’t have to tell Jugram what he needs to ask Juha Bach, plus Jugram seems to be different from how he was a few days before. Jugram mentions that he and Juha Bach are two sides of a scale, while Juha Bach becomes the Father of the Quincy, he’s given the name Mask of the Ruler allowing him to do anything while Juha Bach sleeps.

All Quincies are connected to Juha Bach. Jugram mentions that since he’s going to be the next successor, he should know the story. Since Juha Bach was small, he had the power to distribute pieces of his soul to the people around him. All Quincies have the power to collect reishi from their surrounding to make it theirs however Juha Bach is the only one who can do the opposite.

His ability is the power to distribute parts of his soul. When he was little, he could do it by touching others but then he discovered a much more powerful way. He was able to directly carve the initial of the power inside the other person’s soul. From here he could distribute a more deep and strong part of his soul, ultimately making them Stern Ritters.

Uryu asks how he can carve the initial inside a soul, Jugram mentions that he’s already done it to him when he drank the cup of blood from Juha Bach. By taking part of the King, he was able to complete the ritual to carve the seal. Jugram approaches him asking if he regrets drinking it because it’s too late.

Jugram mentions that he thinks that the only reason why he accepted their invite was to avenge his mother, however as soon as he did he had no way of going back. When someone who’s received part of the soul dies will automatically absorb by his majesty.

On top of this parts of Juha Bach have already been distributed within Seireitei during the previous battle. This battle is for Juha Bach, all of the Stern Ritter and Shinigami who touched parts of Juha Bach’s soul will offer their souls to him when they die. No matter who dies in this battle, every time it happens Juha Bach will become stronger and live longer.

It’s described that wars and battles are Juha Bach’s life, if he doesn’t keep absorbing souls one day he will become unable to see, hear or even move and go back to his old body. He will never stop fighting and there is no way to run away. Neither for Jugram and Uryu, they literally live for Juha Bach and will die for him.

Morning will come and Juha Bach will wake up, to which he does and mentions that he’d like to thank the souls of the ones who had died. He can still see the world clearly. However it seems that he’s growing old as he’s beginning to gain white hairs. Seem’s like he’s getting older. This morning brings a new fight. Bleach 565 ends here.

A great chapter which explains the past of Juha Bach or Juha Bach, if you’d like to call him that. There doesn’t seem to be a definite translation for his name. Nevertheless it’s good to see his past and how his power fully works. Can’t wait for next week’s Bleach 566 to see even more awesomeness from the Shinigami and Quincies.