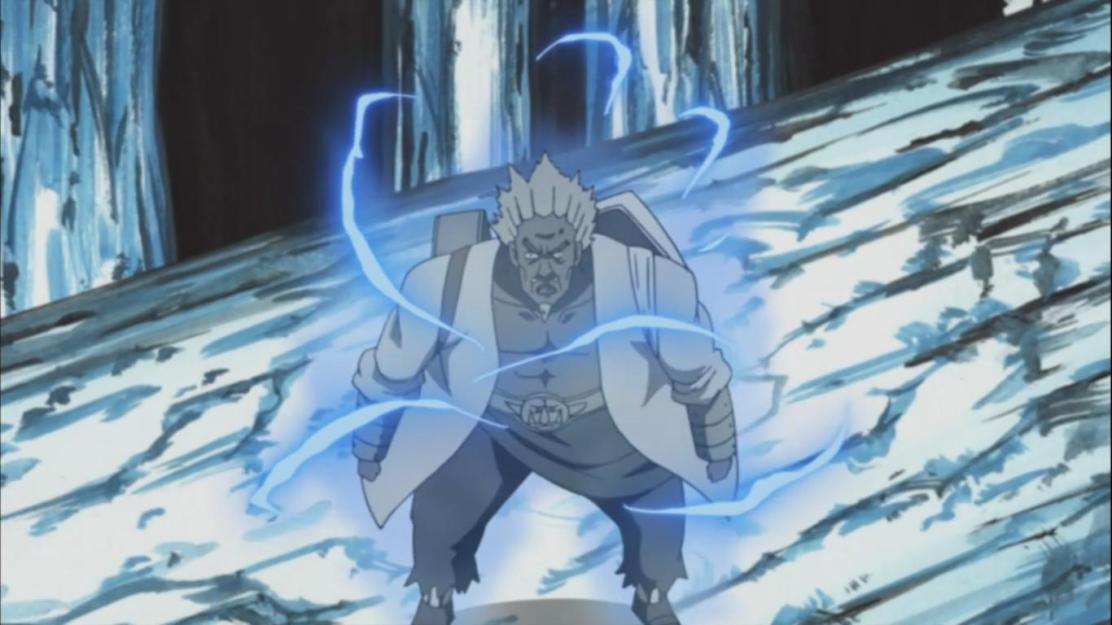 Naruto Shippuden 287 starts off as a bit of a filler but tries to join with the current arc, but it personally seems like a filler all over, which also has nothing to do with the current arc, plus it repeats parts in which Tsunade’s Dan and little brother are related to Naruto! It isn’t one of the best episode.

Naruto Shippuden 287 starts of as Tsunade and Raikage are talking about what had currently happened to them. The Raikage starts to explain what had happened, he reveals that while they were going to obtain the Hidden Jutsu from the Cedar Village, they were faced by a large flash, they stop to see what it is.

They realize that there are some unusual noises, at this point the Raikage are faced by enemies who are not yet showing themselves. One of the Raikage’s helpers called Karai, releases his jutsu in which he uses his Lightning Attack, at this point, he’s faced by a heart problem in which something affects him making him stop his attack.

The enemy reveal themselves as the Nokizaru Squad who prey on other shinobi, or they work on behalf of others for money, or to get something back from somewhere. The Raikage attacks but they all turn into smoke, at this point, one of the other helper tries to help the Raikage but is also trapped in the attack from the mysterious enemies.

He steps behind and goes to attack the enemy but as he goes to attack them, it seems as though his heart is about to give out but a large ball containing pure chakra forms on his chest which explodes, his last words told the Raikage not to come any closer because it would kill him.

Nigai’s death make the Raikage pretty angry and Karai tells him not to do so because it could kill him, but he does it anyways, he uses quite a lot of his chakra all at once which could have scared away the enemy for a while.

The Raikage and Shizune ask how Nigai exploded but why Karai and the Raikage did not explode even after using their chakra. Karai’s symptoms are explained as he knew that using his chakra would cause him to explode but he quickly suppressed any further activity and prevented an explosion. The insect on his chest is slowly sucking his chakra until it explodes.

Shizune asks why the Raikage is still fine, Tsunade answers the question by telling him that he still has the insect inside him, it’s just not visible at this point, she explains that since he used the chakra he was building up all at once, this lead to insect not having any time to actually absorb any chakra during the build up, thus it has not yet shown. She also  explains that the light of flash has caused the Raikage to breathe the insect in.

Tsunade tells Shizune that a simple surgery will help both the Raikage and Karai in taking the insect out. They start first on Karai because he’s most affected but he could explode at any moment, Tsunade shouts at him because he’s not listening.

A bus starts to get closer to the Raikage from the back. At this point, Tsunade asks for the Raikage to give her his word that he won’t do anything bad, at this point she quickly jumps and gets the bug, the Raikage thinks that she’s about to attack him, but in fact gets a bug.

Somewhere else, the enemy appears in which they talk about their plan on getting the scroll back from them so they can sell it off to their employer. They want to use the Raikage as a way to get them to hand over the seal.

Shizune is ready to the surgery, Tsunade is better trained but says that she cannot do such an operation, the Raikage gets angry because she herself won’t allow herself to do it, she mentions that Shizune herself is a great and high leveled medical ninja. As Shizune goes to cut it, the insect becomes large and blood spews from the chest of Karai into Tsunade’s face.

At this point she starts to freak out, the Raikage realizes this and seems that Tsunade is a Hemophobia, that’s why she had not done the surgery herself and had left it to Shizune. Tsunade asks to be left alone where she goes and thinks about what had happened in her past with Nawaki and Dan.

The Raikage asks Shizune what had happened to Tsunade to make her go like that, Shizune explains to the Raikage that there were two people who she most loved, one was her little brother, Nawaki and the other was her lover Dan. During the Third Great Ninja War, Nawaki had died.

At another point, Dan is also seen dying in front of Tsunade as she tries to save him, blood spills from his guts and keep on going, she’s unable to stop it, after he closes his eyes and it becomes silent she develops her Hemophobia due to the fact that when she deals with blood, something always goes wrong.

The Raikage hears this and also agrees that after such tragedies that even he would get lost in life. He mentions that Tsunade is a medical ninja who has lost it, this strikes a nerve on Shizune which makes her go a little crazy, she throws the insect onto the Raikage’s feet and tells him that he doesn’t know who Tsunade is because Shizune will carry on Tsunade’s will.

After some time, both the Raikage and Tsunade are running meaning that they were going back on an old mission in which they were discussing what had happened, the Nokizaru Troops were defeated. The Raikage asks how she had gotten through her challenge, she explains that because of his strong will, she was able to save him and he lived. His Will Of Fire to become the Hokage helped Tsunade to realize that both Dan and Nawaki also wanted to become Hokage. After some chatter from Naruto and Bee, Naruto Shippuden 287 ends here!

A simple episode reminding us of the past between Naruto and Tsunade, the fact that she was somehow saved by the will of Naruto helped her to realize that Nawaki and Dan’s will lives within Naruto. Can’t wait for next week’s Naruto Shippuden 288, titled “Danger: Jinpachi and Kushimaru!”, when we get back to Kakashi’s fights against the Seven Swordsmen, especially Jinpachi and Kushimaru.