One Punch Man 77 see’s Saitama and King meet up, talk for a while as it seems like Saitama is bored and fed up with having no real competition when he fights. Saitama asks him to come play games with him, read manga and so on, but he doesn’t want to. King even gives him some really good advice. Garou had fought up against Watchdog Man who absolutely kicked Garou in the ass. Garou, hurt, see’s King and Saitama, tries to attack but Saitama quickly kicks him and keeps walking like nothing happened. 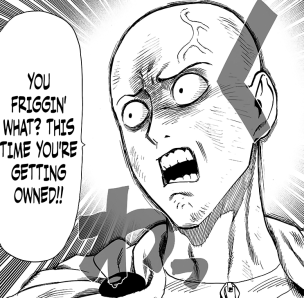 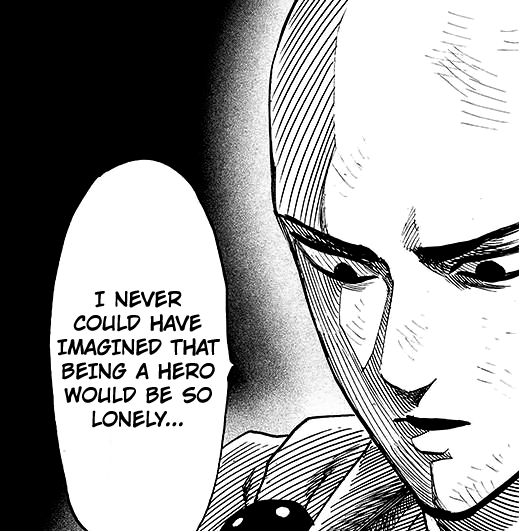 One Punch Man 77 begins as Saitama and King meet, seems like King went to pick up the latest volumes of a manga he likes. Saitama looks really gloomy, Saitama goes to speak but King presumes that he’s having a hard time because he has no hair. Saitama mentions that it’s a vague problem, he mentions that he might actually be too strong, it seems that he’s so strong that there is nothing as a good point of reference.

There’s nothing left to absorb or gain from anyone he fights. He doesn’t think he’ll be able to become stronger that he currently is now. King mentions that it’s a huge achievement, but for Saitama, he thinks that he’s beat all the levels and become the strongest person, rather he’s just bored. Within a game, King mentions that he could always go back and collect all the items, clear it faster, and so on.

Saitama seems to have forgotten the feeling of bitter defeat, or a battle that close by the skin of your teeth. He feels like he’s on a different world altogether. He could have never imagined that being a hero would be so lonely. King tells him that there’s a ballroom dance class in front of the Z City station, he tells him to check it out.

Saitama then mentions that this wasn’t what he was talking about. There’s been more and more monsters popping up lately, that he doesn’t even have much time for dance lessons. Maybe a trip somewhere shall help Saitama. King begins why saying that he’s bored but he doesn’t want to take action to change, he tries to seek some stimulus but doesn’t try to attempt to challenge new things.

To be a human is to be an eternal wanderer, it’s up to him to discover new vistas of life. He asks if Saitama is confusing power and triumph. The noble path of hero is much more than a mere quest for strength. It’s ultimate goal can’t be reached so easily. Winning hard battles may give you a nice feeling of accomplishment, but what king of hero lives for nice feelings. What justifies a hero’s existence is to protect people, it’s meant to serve society.

King continues to say that Saitama could be the strongest hero but he is far from becoming the best hero. When he considers the quest to achieve such a high ideal, he’s got a long way to go. Until Saitama can answer what the pinnacle of heroism is, he can’t afford to worry about something as trivial as tedium. Saitama thinks that what King has just mentioned is quite amazing.

The way to do this sounds boring to Saitama, thus King invites him to come play a few games with him. He’s not in the mood to play thought. Everything just feels empty and meaningless. He mentions that his feelings have becoming so numb that even if King beats me in fighter, he won’t get angry or frustrated. King mentions that he’ll give him a handicap, to use only two fingers, which pisses off Saitama!

Elsewhere, we see Garou, who was previously fighting Watchdog Man, it seems like he turned the tables on him, although it looked easy, he took him lightly. He was barely able to escape largely because Watchdog Man only cares about his territory. He’s damn strong, seems like Watchdog Man was able to predict and even able of touching his paws to every attack from Garou.

It seems like it was a bad match up for him as Watchdog Man is a humanoid monster as he walks on four while Garou only knows how to fight with two. It was a learning experience for him, although he’s ready to fight once more, especially a rematch. He’s having so much fun he can hardly contain himself. Out of nowhere, Garou notices King coming his way.

He mentions that he might be hurt, he can still fight, he tries to see through King’s defences, he hasn’t even noticed him yet. He looks through and runs at him. He gets close and tries to attack, but Saitama saw this coming a while ago, and when he gets closer, Saitama just kicks him out of the way!

Seems like both didn’t get a good look at him. Saitama and King keep walking after Garou’s body goes through the wall. Saitama and King keep walking, seems like Saitama also mentions that there’s someone who’s killing heroes, and he’d like to go up against him soon. Seems like Saitama could actually have something in common to Garou. Saitama has some high expectations of Garou (they’ve met twice now), he might be even stronger than him. King hopes that they’ll meet soon, One Punch Man 77 ends here.

A fantastic chapter as we discover Saitama’s feelings and whats actually happening to him, and the best person gets to give him some advice, King, the faker. I honestly can’t wait for next week’s One Punch Man 78, it’s going to be awesome!