Fairy Tail 532 and 533 are released this week with two fantastic chapters focusing on the amazing power that is Fairy Heart. Mavis arrives and her power is stolen by Zeref who upgrades using its power into the strongest Mage. Zeref then pierces into Natsu potentially causing him to bleed out and die as he’s told to say hello to Makarov in heaven. All whilst Acnologia still chases down Blue Pegasus ship. 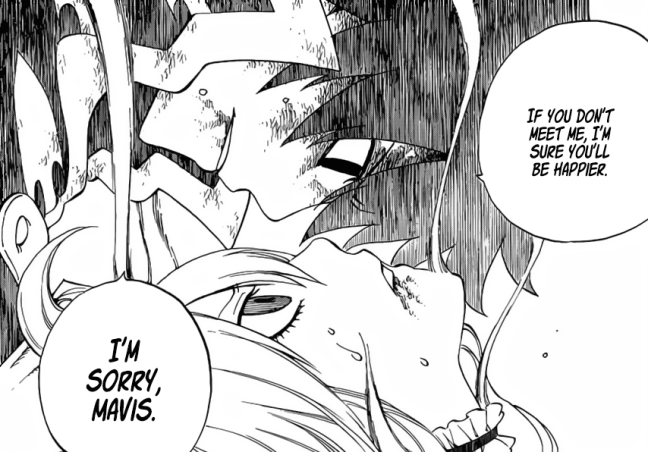 Fairy Tail 532 and Fairy Tail 533 begins with coloured pages as we see Zeref and Mavis together, then the other couples too. We start with Natsu using Dragon Force, when he’s about to attack, Mavis goes into the middle to try to stop him. But Zeref just grabs her and initiates the ability to take Fairy Heart from her, even after she tells him that she can let him go free from his curse. It all happens after he describes that he cannot kill Acnologia.

And even after humanity has been annihilated by Acnologia, they’ll be the only two left, which means they’ll be Acnologia’s toys. Thus he begins to initiate a spell which allows Zeref to take Fairy Heart. All whilst Anna along with the others are still on Blue Pegasus ship flying away from Acnologia.

Natsu tries to stop Zeref but he gives a look which somehow manages to hit Natsu. Zeref explains Neo Eclipse which shall allow him to go back in time to when he was mortal, and when it was still possible to kill Acnologia. Zeref mentions as they won’t meet, it will mean that Mavis will be a lot happier. He promises to fight alongside Natsu and kill Acnologia whilst its still possible, all to protect the future of mankind.

Mavis asks to not erase this world, as it’s the world where they both met each other. Zeref completes the spell as Mavis drops to the ground, she’s not dead, just drained. Natsu is pissed off. Zeref raises his arms and calls forth Fairy Heart. He transforms into his Infinite Magical Power, the power of a god which can overcome time.

Everyone notices this light, some decide to go towards the guild but more show up as Mavis had previously told them to not go close to it as it might be dangerous. Seems like they know that Acnologia is around and that it’s chasing the Pegasus ship. Lucy, Gray and Happy are also hit by the light.

They notice that Natsu and the END book are connected, so maybe if they somehow manage to rewrite a few things then they could potentially help Natsu somehow. Zeref begins the white mage here as he now has wings and a whole new form. Natsu is pissed off, Mavis is unconscious and Zeref is stronger then ever.

Natsu attacks using his Enryuo No Houken which absolutely destroys one part of the guild, all the while he says sorry to Makarov for destroying the guild. However, seconds later the buildings start to rejoin and Zeref’s body begins to appear again, he describes that he has absolute control over time and space. What he calls magic that overcomes all magic.

Zeref approaches Natsu and tells him that its  power that is suited to end this world, then pierces into Natsu’s body which causes a critical hit. Natsu begins to bleed out as he loses so much blood, then Zeref tells him that he doesn’t need to say sorry to Makarov as he’s already dead. He hopes that he shall meet him in heaven as Natsu is left to bleed there. Zeref walks away as the Fairy Tail 533 ends here.

Two fantastic chapters, seems like we’ve got ourselves the strongest mage and the strongest dragon. All whilst Natsu is left to die on the ground, but could maybe Lucy and Gray help him out? We’ll have to wait for next week’s Fairy Tail 534 titled “The Promised Gates” to see what Anna has up her sleeves.