We know that an upcoming Bleach live-action movie is coming in 2018, with that in mind, the cast seem to be on their way of filming the adaption. Apparently, some leaks have been popping online this week as fans look upon Ichigo and his Shinigami costume. There has been no confirmation if these images are actually part of the adaption live-action film. 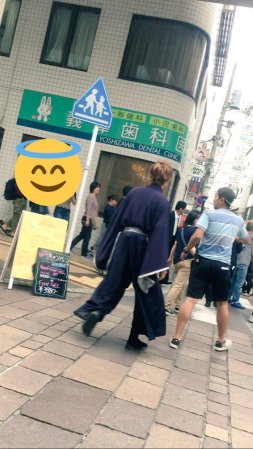 From the images themselves, there has been a lot of criticism from fans about the costume that we see this Ichigo in. Some say that Ichigo’s live action sword looks like cardboard covered with silver paper, others say that it looks more like a “huge butter knife than a sword.” It’s also possible that the movie hasn’t yet begun filming, and this might be some sort of test location filming test, all we can is hope.

At this point, I’m guessing that the film shall include a ton of VFX to compensate for the costume Ichigo is currently wearing. I hope that more or better costume is worn. Nevertheless, it seems like a good start for the movie. So what are your opinions on this? Go ahead and comment down below to tell me.