As part of the 30 day anime challenge, today I’ll be answering what I think my favourite attack is within an anime. From the different types of animes that I’ve watched, there are a few that I love seeing every time it’s used.

So recently, I’ve been watching a lot of One Piece, trying to catch up to the latest episode and then chapter. I am currently around episode 610 where the Straw Hat faces Caeser Clown. From this point, Luffy’s Gomu Gomu no Pistol has definitely been one of my favourite of the show. He’s been the driving force against Caeser and the whole SAD thing along with the badass that is Law. 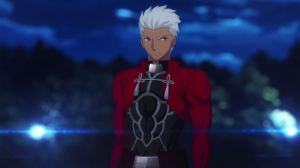 Unlimited Blade Works’ Archer is also pretty good, although he’s an incarnation of Shirou, Archer is a pretty dope character. He’s able to fight using so many techniques and abilities. And although he’s not used any one amazing technique, his collection of techniques is fantastic to watch. His battle against Lancer and Gilgamesh was fantastic to watch. I think if you have yet to watch the show, I’d highly recommend it.

Naruto has a bunch of awesome and amazing jutsu’s and techniques, the one that always made be cringe all the time Naruto did it was his Sexy no Jutsu Technique which he used multiple times within his school, from then on, he only used it a couple of times here and there.

The latest time he used it was when he along with Sasuke, Sakura and Kakashi, used it against Kaguya in order to distract and kick her ass, it was surprising that he even used it. Definitely one of the techniques within Naruto that only he as well as Jiraiya can do.

So with that said, I think I’ll go with the most common technique known to all Bleach fans?

This technique is called Getsuga Tensho, it translates to Moon Fang Heaven-Piercer and is most commonly used by Ichigo Kurosaki. The image shows Ichigo’s Final Getsuga Tensho form, but the attack i’m referring to is Getsuga Tensho which he uses against many enemies such as Yhwach, Grimmjow, Ulquiorra and so on.

It’s my favourite technique because of the potency and the power is has and how it can just generally kick ass and potentially kill most opponents he’s fought up against. So with that said, what do you think? Do you agree with me or do you have a favourite attack of your own?

Be sure to comment down below telling me what your favourite technique is.