Fairy Tail 474 see’s the return of Crime Sorciere as Meredy, Ultear and Jellal all return to the battlefield in order to aid in this fight. Meredy aids Juvia, Ultear aids Wendy and others while Jellal joins both Erza and Kagura. Seems like a great battle of time between Ultear vs Dimaria is about to go down. 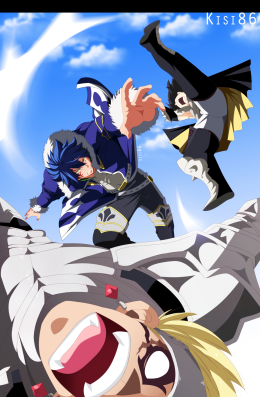 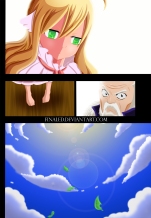 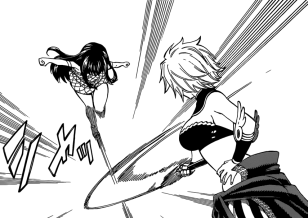 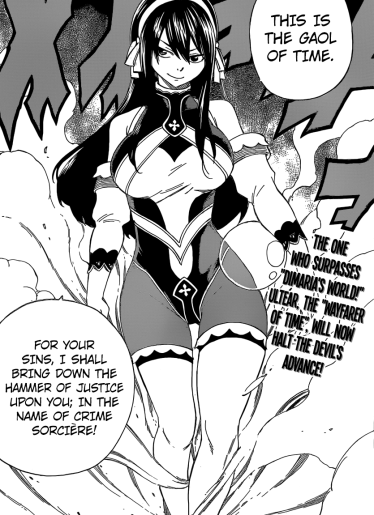 Fairy Tail 474 begins as we see Lucy sleeping and waiting for Natsu to et better, all while Happy mentions and remembers what Zeref mentions about how Natsu could die if Zeref is killed. On top of this, we see that Happy will try his best in order to find another way to stop this. Warren is asked by Mavis the situation in which they’re all in.

Warren mentions that Zeref’s main forces aren’t moving, North we see Gajeel’s forces move closer. They don’t know what’s going on within the battle with in Saints, however there seems to be someone defeated there, but they are still coming towards Fairy Tail. On top of which, Erza’s forces see a member of the Spriggan defeated.

Makarov mentions that their eastern front seems to have been brought down, they also don’t know anything on when Zeref will attack. Thus Makarov asks Mavis to say a few words, this is when she mentions to allow her some time to ponder. Mavis ponders that for the sake of defeating Zeref, what she is able to do is…

Gray and Lyon keep on attacking, so does Juvia, this is when some people try to attack her, but Meredy appears and attacks them. She returns and mentions that Crime Sorciere will join this battle. On top of which, Lyon thinks that she is adorable. Further to this, we see Erza and Kagura attack a couple of soldiers, this is when Jellal joins.

It seems that after Kagura see’s Jellal, she seems to be a little angry and unsure what do to after seeing his face. He mentions that he’s joining the fight once and for all. We return to Dimaria vs Wendy, Sherria and Carla. Using Dimaria’s magic we see her freeze time around her, she plays with them as she mentions that she will kill the one who kicked her in the face.

Using her Time-Sealing Magic: Age Seal, once she is ready she goes to swing her sword when Wendy escapes and thus Sherria also joins in too. They both kick Dimaria back again as quick as she could. Out of nowhere we see a familiar face, it’s Ultear.

Ultear mentions that a distortion in time has arisen, the place they are in is a valley within the fabric of space-time continuum. And she mentions that she would be the only living person able to such a thing. This is where she is gravely mistaken as the world they’re in is her world too, as due to her she will defeat Dimaria in the name of Crime Sorciere. Fairy Tail 474 ends here.

A pretty decent chapter, it seems that Ultear’s back and she might be fighting a pretty awesome and strong character, Dimaria. On top of all of this, it seems that Fairy Tail might be losing this battle in more ways than one. Can’t wait for next week’s Fairy Tail 475, titled “Dimaria Chronos Yesta”.