Fairy Tail 466 see’s Natsu and Happy calming down at a nearby forest while Happy wills to never let Natsu go. All while Zeref tells Invel to produce clothing which is worth for an Emperor to wear. Every other guild begins to prepare on how they should attack, and when they do, many more of the Alvarez soldiers show up to fight. As Brandish holds out in her cell, Marin shows up, he begins to choke her out trying to pay her back for everything. 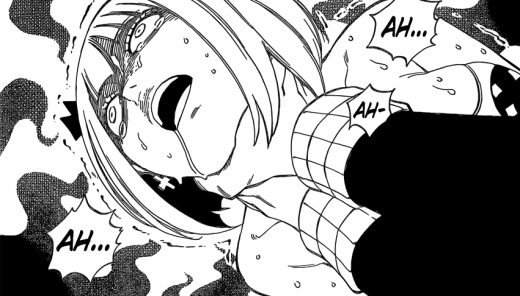 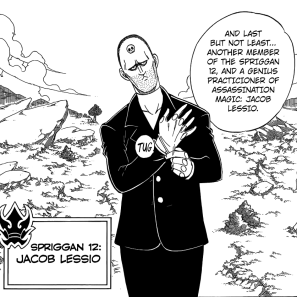 Fairy Tail 466 begins as Zeref mentions that there is no longer anyone capable of stopping him, as he repairs himself. They shall continue their army, and target the Fairy Heart, the absolute power. On top of which, he asks Invel to produce new set of clothes fit for an Emperor.

Happy and Natsu stop by at a nearby forest as Happy clears his hands of the bruises he got from Natsu. On top of which, Natsu begins to thinks of what Zeref told him. All while Happy happily tells him that they’re best friends no matter what.

Happy hugs Natsu as he tells him that he won’t let him die no matter what. At Port Hargeon, we see Dimaria and many other soldiers as they talk about how they’ve arrived at a pretty good place and how they’re next target is Magnolia. All while Neinhart sits in the boats waiting for something. We don’t see his form just yet.

Kagura and Lyon’s guild both get together with round 200 of them up against 2000 of the soldiers an more which are coming by. Kagura claims the start and liberation of the port Hargeon. Dimaria and her soldiers get ready to fight and teach them a lesson.

At the Northern Fiora, Sting and Rogue keep on battling, however a strong opponent appears with the name of Bradman who is somehow called the Grim Reaper. Easter Fiora see’s God Serena as they begin to talk about how he’s a traitor of all of them and their land.

He finds them to be unhappy with their expressions, on top of which they certainly talk about how important August is and how powerful he could be. We meet another with the name of Jacob Lessio who is known to be a master assassin.

West of Magnolia we see Brandish as Marin appears, she notices him as he is told to get her out of those chains but in fact she is held down as he begins to chokes her out in the jail cell as she’s unable to do anything. Marin begins to kill her as he mentions that she’s getting a failing grade. Fairy Tail 466 ends here.

A pretty awesome chapter if I say so myself. Zeref will most likely be unkillable after this. On top of which, Natsu and Happy have grown stronger. All while, Marin slowly kills Brandish, will she get some help soon? Can’t wait for next week’s Fairy Tail 467, titled “Mother’s Key!” when we see what happens next.