Bleach 647 finally shows Shunsui’s Bankai, Katen Kyokotsu Kuromatsu Shinjuu, or Secret if Heavenly Blossoming Madness – Black Pine Double Suicide. Shunsui is largely hit and hurt by Lille Barro’s new abilities yet he is still able to move, once he knows he is far away from everyone else, he activates his Bankai. All while Gerard Valkyrie approaches Shinji, Renji, Rukia and others in order to battle against them. 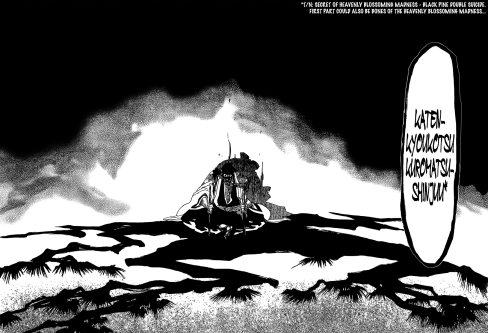 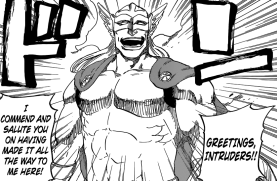 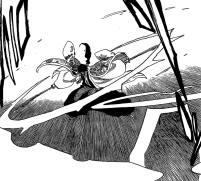 Bleach 647 begins as Shunsui runs around the city as he tries to avoid all the attacks from Lille Barro. He complains as he mentions that he’s being made to run like a chicken with its head cut off, while looking like swiss cheese. It would have been a lot simpler if he has just died at the initial wave of attack, instead he’s still alive forced to make reckless decision.

And without Nanao there, he doesn’t have anyone there to bounce all this chatter with. He keeps on getting attack but keeps on dodging, even if he sometimes gets hit a few times here and there. He enters a room when Lille mentions that he’s still got quite a lot of power since he’s able to run with such wounds.

He asks if running away is even an option for him, Barro tells him that such weapons are nothing and thus meaningless against him in that form. Thus he then uses his Hadou 78 Zangerin, Blade of Kidou where he uses it in an explosive manner. Elsewhere we see Shinji and others run towards the castle, however Gerard Valkyrie show sup.

He greets them as intruders and salutes them for having gotten this far. Shinji mentions that they didn’t come all this way to see him, he mentions that if they’d like to progress any further, they need to defeat him. It doesn’t seem like Valkyrie is listening to them.

Renji uses his Shikai to attack Valkyrie but he stops it. He tells the others to go on ahead, however Valkyrie’s cape becomes way to large, he with a large grin tells others that he doesn’t plan fighting 1 v 1 here, it would be a miracle if he was to even lose in such a match. Their only hope is to overwhelm them all at once.

Shunsui keeps on running, he’s exhausted all his options against him, and he’s ended up running all the way back to where they entered from. By one, they should be pretty far away from there. Hopefully, Nanao doesn’t get caught up in this, as he apologizes right now.

What a marvelous and fantastic chapter, it was already guessed that Shunsui would be forced to release his Bankai sooner or later, and here it is. I guess it’s against one of the more stronger opponents. From the Bankai, it seems that two people will die here, nevertheless I really can’t wait for next week’s Bleach 648 when we’ll see what happens next!