Fairy Tail 254 see’s the battles continue as Natsu battles against Tempesta, while Gajeel goes up against Torafusa. Both teams power up against each other Torafusa sets out his deadly move which raises water everywhere when Gajeel is running out of water whilst fighting under water, all while Lucy, Juvia and Natsu are all unconscious. Levy shows up to give him the last bit of her air by kissing him, he has to fight to defeat Torafusa now. 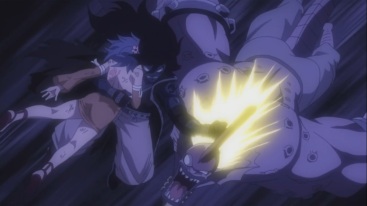 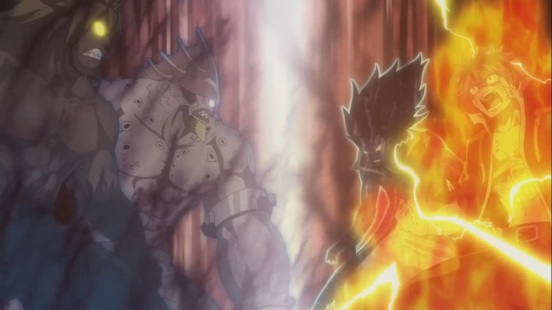 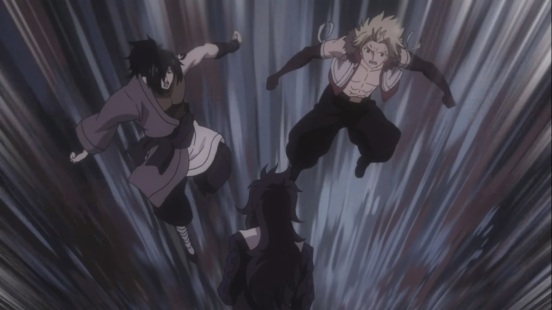 Fairy Tail 254 continues as everyone keeps on fighting, Juvia defeats Keyes which allows for one of their opponents to be defeated,however she is affected by Etherious and thus quickly collapses. Natsu tells them to move away from there so they can fight and get serious.

Others from the guild look for them, they can’t find any of them. Even Levy has gone out to look for Gajeel, while Jet and Droy look for her. Sting and Rogue keep on fighting against Mard Geer but cannot manage to beat him as he’s not even getting serious, he’s just fighting for fun.

Minerva, Erza and the cats keep on going towards the control room to disable Face, however the cats begin to talk about who has better cooking abilities, it seems that Minerva is better. Gajeel and Natsu both get serious now, even Torafusa and Tempesta both get serious

They know that their current magic now won’t work, thus they need to use their Etherious magic, which they do, and so Gajeel and Natsu both power up too. They’re both ready to kick some ass now. Gajeel and Natsu fire each other by mentioning who’s more powerful and thus tell the first to win against them wins.

Thus they each go one versus one and both fight against Torafusa and Tempesta. However, a few seconds of punching, Natsu punches Gajeel, and Gajeel the same to Natsu. They then complain to each other about it, however seconds later Torafusa gets ready and releases his dark water which flows through all the buildings and everyone has some contact with it. Levy notices the water as well as Gajeel’s voice.

Natsu, Lucy and Juvia are having trouble with this water as it seems that they can’t use their abilities, especially Natsu as the water. These three lose consciousness as Gajeel is the only one left now. He begins to spar against Torafusa but cannot fight him in this water, he even goes as far as to close his mouth, but he keeps on losing air.

Gajeel keeps on losing air as he keeps on getting more and more beaten by him. He’s about to lose air, he can’t even move from there. However, he see’s a light, this light gives him air, he opens his eyes and see’s Levy who gives him air, but she falls victim to the water. Torafusa is stopped by Gajeel from hurting Levy. Fairy Tail 254 ends here.

A pretty good episode as both Levy and Gajeel try to help each other out here, to defeat the enemy and save the others who are in this water. It seems that this battle will get even more intense as Gajeel will most likely defeat Torafusa, plus can’t wait for next week’s Fairy Tail 255, titled “Steel”.