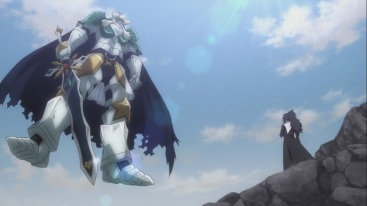 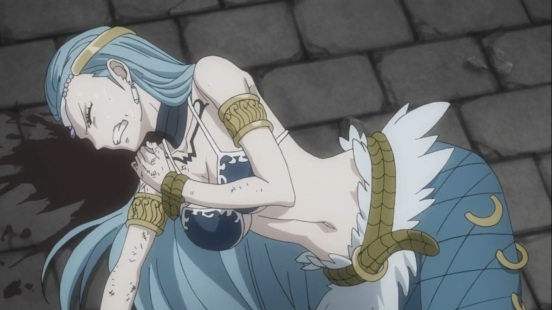 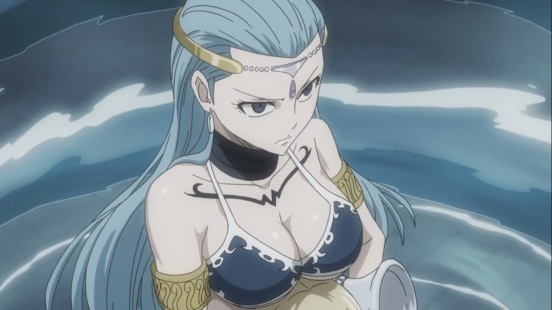 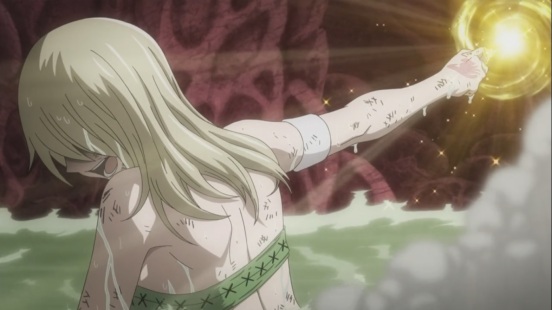 Fairy Tail 248 begins as Plutogrim goes over Magnolia and begins to eradicate everything from the buildings to the ground, all with it’s scream. As this happens, Mard Geer tells everyone that Face project will go on as usual, while also putting a bounty on Lucy’s head for anyone who kills her will be rewarded.

We see a number of soldiers go after her, but she just kicks them out of the way. Archer arrives but Lamy arrives and kicks Archer’s butt. Aries and Loke both arrive in order to fight against Lamy and Torafuzar, but as they’re using a lot of magic, Lucy is very tired. We then see Jackal appear after he was resurrected.

Lucy uses her whip but doesn’t realise his power, as he begins to blow her up from place to place. She goes on under the water as she realises that she much get stronger and save everyone, she can feel all their powers. At that point she gets up and begins casting to call forth Aquarius, some of the water disappears as she appears.

It seems that she is very tired as she’s casting three Spirits at once. Lamy and Jackal are pushed back by the water, however Torafuzar uses the water to go ahead and hurt Aquarius. Jackal quickly gets rid of Aries and Loke. While only Aquarius is left. Jackal seems to have scared off Torafuzar, while Lamy’s head is blown off by Jackal.

Aquarius uses her water as she tries to push Jackal away from Lucy. She begins to tell him of something she can do to win here. She can call forth the Celestial Spirit King, by summoning him she must destroy a golden key. The Spirit and the Holder must have a close relationship.

She goes on forth and begins to destroy it while Aquarius remembers the moment she was little and talked about being friends, as well as other moments when she felt good with Lucy’s company when she was summoned. She goes on to mention that she will definite miss her, and that she’s done more for her then she knows.

A magnificent episode indeed as Lucy’s longest friend has disappeared, as she cries to herself. The Celestial Spirit King will definitely have to do something about their situation as well as to face against Mard Geer and try to defeat him in next week’s Fairy Tail 249, titled “Celestial Spirit King vs Underworld King”.