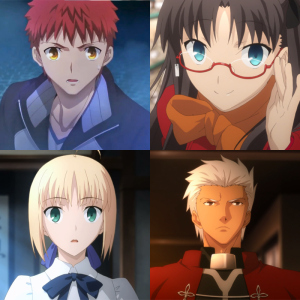 The heroic spirits or servants are Lancer, Archer, Rider, Caster, Assassin and Berserker. The masters will sigh a contract with the spirits in order to fight for the grail and the wish. Unlimited Blade Works largely focuses on Rin Toosaka and Shirou Emiya as they both work together to defeat their opponents.

Before I begin reviewing this series, I’d like to mention that this series is my first Fate/Stay Night series so I won’t know what has happened in the previous anime, manga or novels. So let’s begin, from the very beginning the series unveiled the Holy Grail straight away, we started with Rin when she went ahead and summoned Archer, from then on we met Shirou when he summoned Saber. 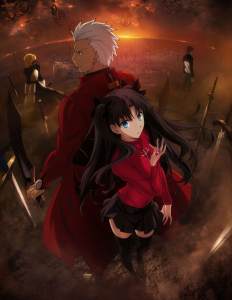 They both nearly fought each other, but in conjunction to fight and defeat Berserker, they teamed up to fight her. However, as the series progressed, we met with compassion between the both of them as they began to work as a team and friends rather then just comrades. Rin helped him out as he kept on getting stronger and stronger.

I’d like to go ahead and mention that the art, animation and audio involved in making this series better were on point. From what I could see and hear, it made me feel the correct emotions at the correct points in time. From the intense battles to the times when heroic spirits or humans died.

The story itself has been written countless times and shown in different times lines multiple times. So it’s no surprise that the story was well written by the team at Ufutable. The battles within the series were very well constructed, they don’t go on for very long, nor are they short. And there is usually always a reason for them to fight.

The character development of Shirou, Rin, and others have been character within this series were quite well done, they show everything that is required to make the viewer think for themselves, and to make the links between character and their actions. In the second season, we that other characters saw more development compared to Shirou and Rin.

These include Ilya and Archer who receive a lot more explanation that helps the viewers obtain a greater understanding of their ambitions and motifs for fighting. Ilya was given her own episode to show her back story as a young child, and how she met Berserker.

On top of which I believe that Archer got the most development compared to anyone else, as we reach the end of the series, we encounter that he is the embodiment of Emiya’s will to become a hero, a person of justice and someone who will eradicate all evil and fight for justice and peace.

Honestly, there isn’t a lot I can say about this series except that I really like it. From the moment I watched the first episode, I fell in love with the art, animation, graphics and sound. The story was also fantastic to see, on top of which everything that happened was unique to this series.

So, have you been watching Unlimited Blade Works? If so, what do you think of this series so far? The story has ended, but I’m sure there might be another edition of the series with a different ending. Still, it’s a fantastic series which I’ve absolutely gotten into and loved. Comment down below telling me what you think.