Naruto Gaiden 3 focuses Sarada’s determination to find her father, to be able to talk to him and learn about her own past. Naruto leaves to meet Sasuke when Boruto gets there late with some food, Sarada mentions that she would be able to deliver it. Shin Uchiha appears to take Sarada from where she is when Naruto appears. 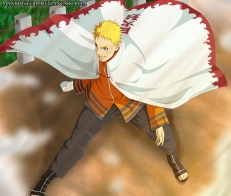 Naruto Gaiden 3 sees Naruto leaving when Boruto appears with some food. Sarada also appears with Chocho when they are willing to take the food to Naruto. They do so when they’re ambushed by Shin Uchiha, he attacks them to take Sarada back to the other man, when this happens Naruto quickly appears after he knows that something is going on.

A brilliant chapter, as Sarada gets closer to finding out where Sasuke is, it seems that her determination will soon pay off. On top of which Naruto is here to help both Sarada and Chocho while Shin Uchiha appears out of nowhere. I guess that there were more than just one Uchiha around. Can’t wait for next week’s Naruto Gaiden 4!