Naruto Shippuden 410 see’s Foo and her team mates as she would like to go on and make friends with over 100 people. Gaara also goes out to the battle field after two people try and bring him out to kill him, another one tries to put up a large sand storm whereby the Chunin exams are quickly postponed. 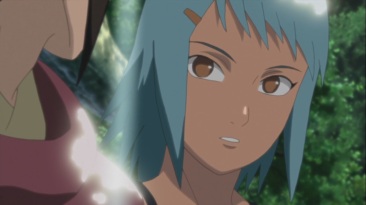 Naruto Shippuden 410 begins with Gaara looking into members who are in the battlefield. Foo and friends have the scrolls, however the others try to calm Foo by mentioning Shibuki’s name to her as she remembers that he’s always tried to help her. They head to the central tower.

Temari and Kankuro talk with Gaara about the members in battle. He looks at three members who are looking for a scroll, one of them mentions that they will find a scroll at the central tower when they setup a trap. A mysterious member, Houichi talks to another about taking Gaara down, while the other man mentions that he will bring a storm to the battlefield.

He calls it the Demon Desert, which in minutes covers everyone in this sand. Kankuro and Temari mention to everyone to stop the exams and quickly bring all the members to shelter. Gaara is left in the village as Temari and Kankuro go save everyone.

Gaara looks on, one of the members collapses,  the other tries to help but Mikoshi falls into a sand bit, the others quickly try to save him but they falls into the pit itself. Foo hears them, she remembers the time Shibuki saved her from getting hurt.

She learned that by helping others she will make lots of friends. Foo goes off to quickly help them, she catches them in her net and lays them down. Gaara arrives and freezes the sand around them, he introduces himself and mentions that she had saved them to become friends with them, also they needed her help.

Gaara mentions that she reminds him of someone he knows, this being Naruto. She says that she’d like to meet him once and become his friend. Foo tries to hand over the scroll to them but they just mention that it wouldn’t be correct for them to accept it without anything. Foo goes off, Houichi finds Gaara and mentions that it’s time. Naruto Shippuden 410 ends here.

A fantastic episode, some cool things happened and we’ll see more of Gaara next week as he tries to defend himself against all the trouble from Houichi, Naruto Shippuden 411, titled “The Targeted Tailed Beast”.