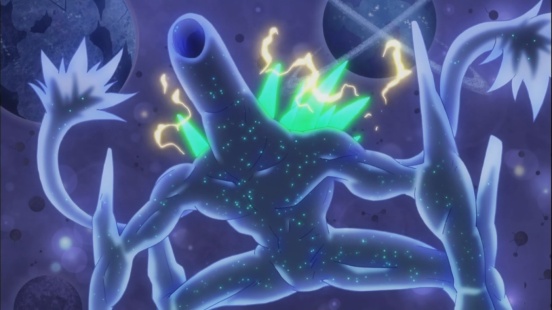 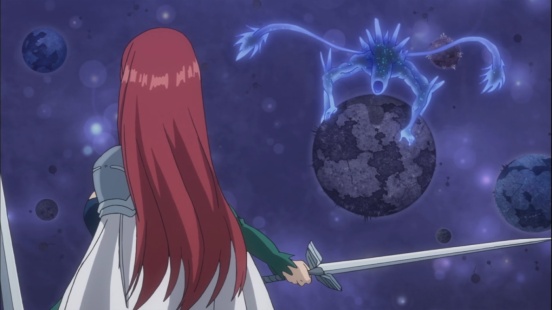 Fairy Tail 218 begins as the Celestial Spirit Beast begins to transform into its new form. Everyone gets ready as it shows its enormous powers. Natsu and Happy keep on going as they enter an endless void. Natsu smells something as there are rocks coming for him, he crashes onto one and destroys it.

He sees something ahead, as he goes for it he’s attacked by lightning. The Beast attacks Gray, Erza, Gajeel and Lucy all at once. Natsu then see’s three ball’s. Red, Blue and Green which he completely destroys. Gray and Gajeel find a weak spot to which they all take down one of its stalks.

Natsu and Happy keep on going, while the others keep on attacking the beast too. Natsu keeps on fighting the rocks. More of its stalks are cut off. They head towards a purple light. Erza and the others keep on bashing it to the ground. When Natsu gets to it, he see’s the King chained up being pulled towards a purple planet. He tries to pull him away but doesn’t work as the 13 chains holding the King are the Celestial Spirits.

The beast seems to be drawing more power as the King gets closer to the planet. Natsu has to decide to wake the king one way or another. He tells him that he must never do something like this ever again. Natsu jumps down to the purple stuff as he decides to eat it!

The beast punches Erza but she blocks and tells everyone to attack. Natsu is eating as much as he can, he wakes up and feels a lot stronger. He feels it as he unleashes his secret art and destroys the whole planet, at the same time the Beast is also killed.

Natsu shows up, so does the King. The whole Celestial World changes back. Everyone seems to be fine as they get back to their normal state. They also go to meet all the Celestial Spirits too. They’re all back to normal, however they don’t know whats going on or what happened to them.

The Celestial Spirit King shows up to thank them for they did, he doesn’t remember anything either, but seems to have had a bad dream of it all. He even tells Hisui that he thanks her for her help. Everyone is happy as everything seems to be back to normal. Seems like this arc has ended. Fairy Tail 218 ends here.

A good end to the chapter, I’m actually glad as we’ll be back to the awesome chapters and the original canon episodes with all the good stuff. Can’t wait for next week’s Fairy Tail 219, titled “What the True Heart Spins”.