Fairy Tail 415 see’s Natsu crying to Acnologia’s death, however he promises to live on, get stronger and turn Acnologia into dust for what he’s done. Skiadrum, Metalicana, Grandeeney and Weisslogia all abide to the Magna Carta where they all promise to protect mankind for the rest of eternity. They all disappear within minutes, everyone says their goodbye with heads up high. 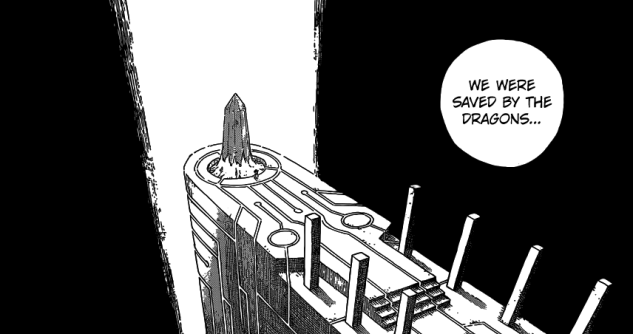 Fairy Tail 415 begins as Makarov mentions that they were saved by dragons, telling himself that he was not courageous enough to unleash the Lumen Histoire. Mavis appears as she tells him that it’s fine since it just means that it wasn’t the time yet. All the dragons meet, Grandeeney says that Igneel with all of them have driven Acnologia away.

She also says that she did a good job of destroying Face, Wendy just says that she had Carla with her to help. Metalicana just mentions that Gajeel has a vile look in his eyes. Skiadrum and Weisslogia, are asked how they’re still alive. They mentions that they can manipulate human memories. Igneel was against them doing so.

Ultimately they had the memories of killing them. They also mention that they’re technically half dead. They’re already dead, they did so a long time ago. However their souls was extracted by Acnologia’s Dragon Slayer Magic. This is why it they had to stay in their bodies in order to prolong their own lives.

Once they leave their bodies, they are unable to return, the strength we displayed today was for the first and last time. They mention that even Igneel was unable to defeat Acnologia, then again Igneel only had a little of his strength he managed to retain in his half-dead state. There will be no other dragon as gallant nor any as human-loving as Igneel.

Natsu is crying, he begins to talk as he mentions that he promised that he wouldn’t go anywhere. Don’t break your promise, Natsu mentions. He has been looking for him for so long. He mentions that he’s learned how to write, and his magic is a lot stronger. Not to mention that he’s made a ton of friends and got a job too.

Natsu mentions that he’d like to share it with him, he’s crying at this point as Happy watches and cry’s too. Grandeeney begins to say her goodbye, she mentions that they will face many hardships in the future, however she is confident they will overcome them. Gajeel appears telling Wendy to send them off with their heads held high.

They all span their wings and flap them into the air. They mention that everything is now in the past, they’ve joined their hands in peace now.The age of dragons in one sense has come to an end. The future from here on will be forged by the power of humanity.

In accordance with the contract made 400 years ago between dragons and man, The Magna Carta, dragons shall continue to watch over and protect mankind, for eternity. A large beam of light appears as all dragons in that area glow and begin to disappear. Grandeeney tells Wendy she loves her. Metalicana tells Gajeel that he still has a vulgar look in his eyes, Gajeel just smiles at his comment. Sting and Rogue say goodbye and thank you.

Natsu still talks to Igneel as he disappears, Igneel tells him not to shed tears, he asks what he normally does when he’s sad? Natsu stands up, as Igneel mentions that he will be with him now and always. She him more of how he’s grown up, show me the way you live your life he mentions. Natsu shouts, he will live on, become stronger and turn Acnologia into dragon dust! Fairy Tail 415 ends here.

A fantastic chapter, Igneel and the other dragons have now disappeared, and I guess the final battle is not now. Lumen Histoire was not activated and Zeref has once again gone into hiding. Acnologia has also fled so we’ll just be waiting for more cool stories. Can’t wait for the next Fairy Tail 416!