Naruto Shippuden 374 to see a new Three-Way Deadlock between Naruto, Sasuke and Sakura are they all summon their animals to fight against the Ten Tail. Naruto’s Wind and Sasuke’s Fire attacks join their Rasen-Shuriken and Amaterasu Bow to create an even more powerful attack between the both against the Ten Tails, to which it seems to be burning it. 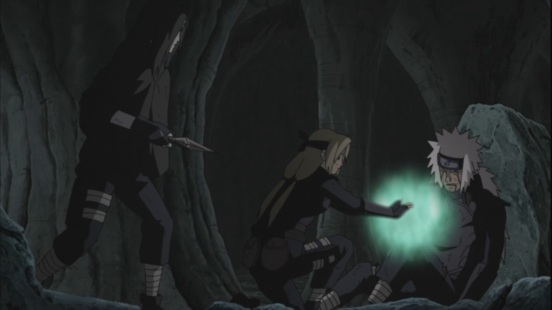 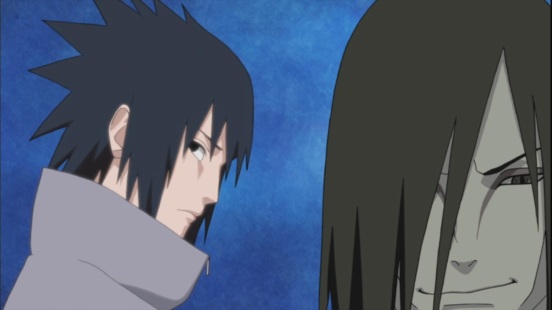 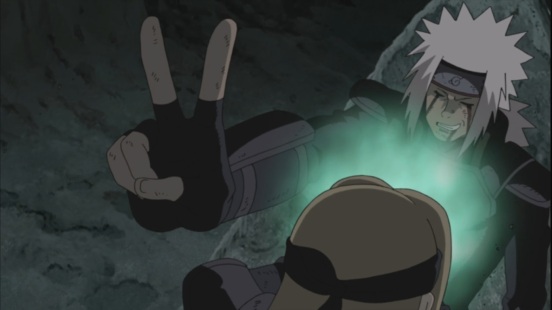 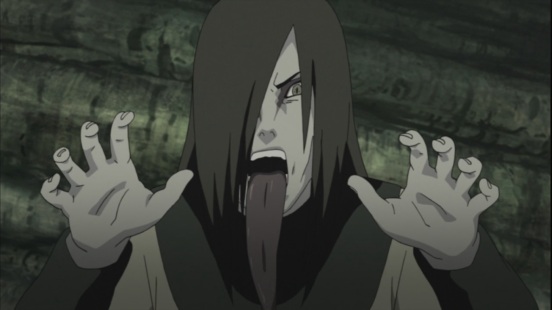 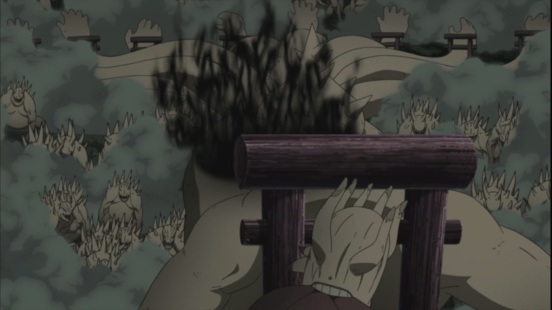 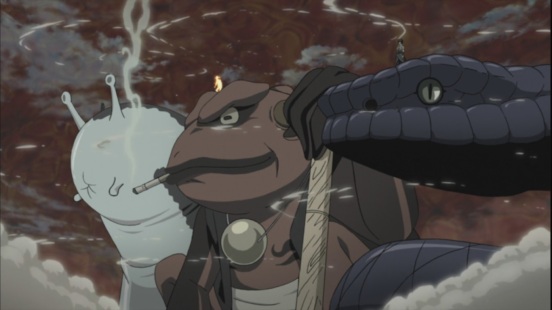 Naruto Shippuden 374 begins as Naruto, Sasuke and Sakura all summon their animals to help fight. Naruto notices that he’s not with his regular toad, he’s now with Gamakichi who was a lot smaller the last time he saw him. They all target the Ten Tails to which he’s their target.

Sasuke tells his snake to advance forward to get closer to the Ten Tails. Sakura tells her snail to help everyone healing. Hiruzen remembers the Three-Way Deadlock between Orochimaru, Jiraiya and Tsunade.

They all get ready and begin. Naruto jumps up, Sasuke snakes through every spawned enemy. Sakura helps out others with her healing. The snails get on everyone and their chakra and power begin to get restored. Sasuke gets blocked when he gets cuts through.

Naruto prepares his Rasen-Shuriken when Sasuke also prepares his Amaterasu Susanoo bow. Just before they strike, both their weapons touch each other. Naruto remembers the moment form his past when he was talking to Yamato about their compatibility. Both the Amaterasu and Rasen-Shuriken mix to create a new weapon to which it strikes Ten Tails like a bow, and aids in the hurting of the Ten Tails.

The Hokage’s are impressed by their attack, to which Minato even names it but then says never mind. We see Sasuke and Naruto happy that Ten Tails is burning away. Sai asks Jugo about Sasuke’s plans to which he himself doesn’t know.

Orochimaru, Suigetsu and Karin are running towards the other Kage’s to which they’re hurt and unable to heal properly as Tsunade’s body has been split in half by Madara. Katsuyu is aiding in keeping her alive but cannot due to low chakra.

They all approach when Katsuyu builds her acid, she asks if he is there to help to which he says that he is and just needs her to trust him. If he decides to hurt Tsunade, she can kill him. She believes him and begins helping when he can.

The other Kage’s are in her fragments, she cannot heal her quickly due to her weakened state. Moment’s later we see Suigetsu get handy in his work as he is told to help out in putting her back together. Karin is also told to give her chakra to Tsunade and let her bite her. She does this.

Tsunade begins to get better and is rejoined by her other half. She wakes up to ask Orochimaru what his plans are since she had previously thought he wanted to destroy the village. On top of which he has found a way in the way Sasuke does things.

Tsunade never imagined him saving her, plus she tries and reminds him of the moment they were in a Three-Way Deadlock. We see Rock Ninja’s tries to kill them when Orochimaru mentions that Jiraiya is injured, he cannot be saved and will die, thus suggests leaving him. We see moments after how Jiraiya shows him a peace sign.

As they’re still fighting it out to leaving him or save him, ninja’s from the leaf appear in an effort to save them. Jiraiya trusted Orochimaru completely when he just wanted to leave him there. Orochimaru mentions that people can change, however Jiraiya died without changing.

Orochimaru mentions that they’re not made of stone, their desires and action change. And thus it is why he wants to see how Sasuke will change and observe him. Tsunade asks if he knows about the war to which he mentions that it’s because of that he helped. Orochimaru heads out as Tsunade finds out that Sakura has enabled her 100 Healing Jutsu. Naruto Shippuden 374 ends here.

A great episode and nice to see Tsunade back to her normal non-split self. Can’t wait to see the Kage’s get all healed up and back to normal in fighting condition. Can’t wait for next week’s Naruto Shippuden 375, titled “Kakashi vs Obito” when we continue with Kakashi and Obito as well as see parts of the Ten Tails as it seems to still be going strong.