Fairy Tail 393 reveals who and what Silver is, to which Keith, the necromancer, has brought back Silver from the dead and thus is nothing but a dead corpse. While at the same time he tells Juvia that she must defeat Keith. We also learn the name of Gray’s mother to be Maki who also died during the attack from Deliora in his village. 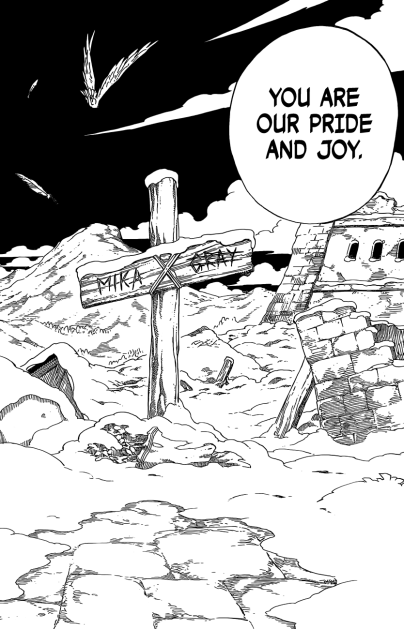 Fairy Tail 393 see’s Silver tell Gray to finish him off while Gray tells him that he wont, he is his old man and won’t do such a stupid thing. He asks him what he’s doing there, Silver reveals that he was waiting for Gray to kill him, he mentions that he’s right that he was once he’s father however now he’s no longer a human or demon.

He’s now a corpse, for 17 years he’s been dead for a long time. Keith reveals to Juvia that he is now a corpse, Silver reveals that Keith is a necromancer and has the ability to control the dead. He collected the corpses from the village and created several hundreds of corpses, to which he was the only one to exist closest to his real self.

He was there for the sake of revenge against the demons that stole his family. While being in Tartarus, he secretly killed demons however he was mistaken with the Sun Village. He slowly began reducing the numbers of demons when he saw that Gray was still alive, at the moment he realized that his hands are too stained and there is no right to fight for your sake or for Mika’s sake.

Gray realises that this could be why he was hell bent on dying, to which it’s revealed that he’s already dead however just wanted to erase his existence. Silver mentions that he leaves everything to him, to which Gray mentions that this is not a choice he can make, plus there is nothing left for him.

Silver realises that he said some messed up things to which he apologizes. Silver mentions that he’ll be better off just forgetting about him, the man he knew died a long time ago. Gray then mentions that he’s still his father to which Silver tells him that he’s no ones father if he hits his own children.

Silver tells him to finish him off, Gray pulls out a sword to which he asks for him to kill his quickly to which he’d like to rejoin with Mika. He tells him not to hesitate since he took part in face and killed former council members, he is his enemy. Gray reveals that he may be his father by blood but none of that matters if you’re an enemy of his guild. That’s how we’ve always protected our guild.

However Gray then mentions that he cannot just kill him and just ends up crying. He stops in his tracks and stops. Silver gets up and quickly gives his own son a hug. Silver tells Gray that his body won’t hold out for long, to which he just says that he’d like to be with him just a little longer. Silver tells him that he’s grown up into a fine man. He is their pride, to which we see that the first time we see Silver was with a grave to which we see the names to reveal Mika the wife and Gray the their song.

While Juvia fights Keith she gets a telepathic message from Silver to which he asks her if she’s Gray’s woman, he goes on to ask that she must defeat the necromancer in front of him as he’s controlling the dead former council master, she also finds out about the 3000 faces, to which he mentions that she must do this for Gray. Fairy Tail 393 ends here.

An awesome chapter and since we’ve found out how it all happened and such I’m happy to see this happen because it’s been a long time since we’ve seen any real emotions from Gray. It’s awesome, still I can’t wait for next week’s Fairy Tail 394, titled “Juvia vs Keith” when we see these two fight against each other.