Bleach 550 explains that the Quincy’s they’re facing are more than what they seem. Toshiro faces up to Bazz-B when he gets himself hurt by just one finger, while Bazz-B also explains that he was able to offset Yamamoto’s fire! Furthermore, Mayuri’s opponent, Askin Nakk Le Vaar understands that he’s also strong. BG9 shows off that he’s not just a mere machine but in fact something that will kill Sui Feng if she doesn’t kill him first. 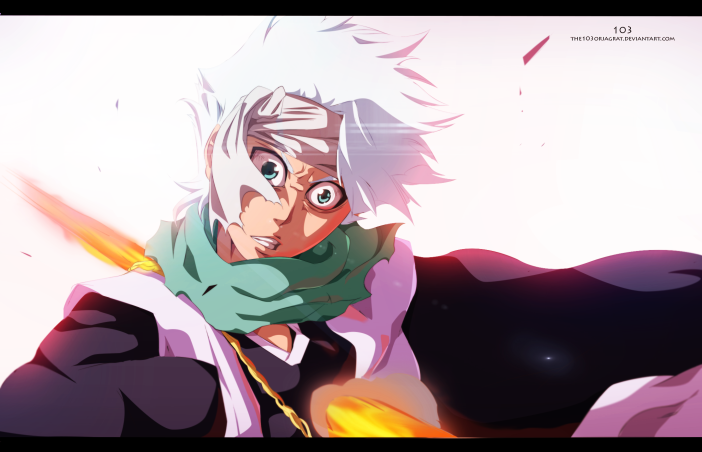 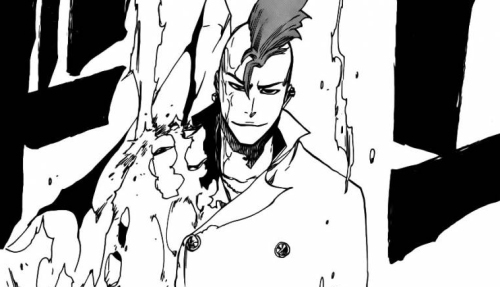 Bleach 550 begins as Nakk Le Vaar mentioning that he feels that it will take some time against Mayuri, that is why he’s giving up. Mayuri asks what he means by this, Nakk Le Vaar just mentions that he’ll have to try many different patterns in order to get him to die. He explains that he wants to get things done with quickly that’s why he’s going. He then asks if he isn’t going to come after him, Mayuri mentions that he’s free to leave.

Nakk Le Vaar explains that Mayuri is indeed powerful. During Toshiro’s fight, a wave of fire appears, everyone else is shocked that Toshiro wasn’t able to defeat him, Bazz-B explains that his cloths seem to be ruined. Sui Feng notices a spike from BG9 coming to here, she holds it and pulls it, she notices that his body is made of a robot, from which Mayuri would have a lot of fun playing with it.

BG9 explains that if this is all the power she has, there is no need for him to use the Bankai which he stole from her. She quickly goes berserk to which she quickly steps using her new found technique. however from nowhere a spike appears and hits her in the arm even at her speed, he explains that he was able to obtain very useful information from her Shunko, from that he quickly attacks her.

Bazz-B mentions that Toshiro was previously talking about his flames being weak, he explains that the Stern Ritter who were burnt alive by Yamamoto are still alive, and it’s not because it missed them, it hit them directly. He mentions that he was able to offset Yamamoto’s fire! He touches the pillar breaking it instantly.

Bazz-B mentions that too bad he doesn’t have his Bankai as he could have showed him that only one of his finger could have killed him. Toshiro uses his Ice attack to which it’s quickly blocked by Bazz-B, Toshiro mentions to retreat quickly, he builds a wall of ice however Bazz-B quickly shows him that he only needs one finger to which he uses his 1 Burner Finger to quickly and swiftly attack Toshiro right in the chest, a hole was made. Bleach 550 ends here.

What an incredible chapter, Bazz-B, Nakk Le Vaar and BG9 are all incredibly powerful! I cannot believe that they were able to do so much damage without even putting any effort into it. Plus disabling Yamamoto’s fire is just on another level, the fight continues during next week’s Bleach 551 chapter!