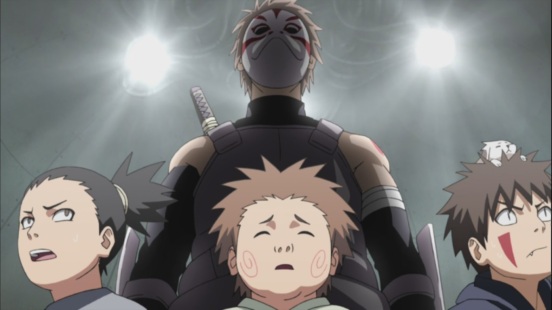 Naruto Shippuden 315 ends the somewhat touching filler arc as Yota’s story ends with him dying. We learn that Naruto and the others tried to save him, even tried to get him out of the village, but ultimately their memories were wiped by Yota himself, we also learn about his background. Naruto and the others are shocked that their friend is gone!

Naruto Shippuden 315 begins as Naruto faced Yota, he tries not to attack but it seems that he cannot do much. He talks to the others to find out that they’re also facing Yota in the same situation, plus they all remember him.  Naruto detects that these Yota’s are nothing but White Zetsu’s, in other words they’re being controlled by another one somewhere else.

Ino-Shika-Cho quickly take out their Yota, it’s revealed that it is a White Zetsu, Kiba and Akamaru do the same. And so does Sakura, all to find out that they’re white zetsu’s. They’re all upset about killing him. We go to the past where Shikamaru and the others go into Naruto’s room, they invade and notice that there is a rain shower. They follow it.

We go into a secret place where Yota’s being questioned to where he’s from, he cannot answer any of the questions so starts to cry as he’s unable to do much. Naruto begins with his mischief on the Thirds face and tries to get all the attention, this helps Choji and the others to get into the building. They are nearly noticed but get through when they need to.

Yota’s being asked a question when Shikamaru and the others arrive to help Yota which they do. Unfortunately, Shikamaru’s shadow is broken by the light, Naruto appears and he’s quickly neutralized after shouting much. He shows that Yota was his first friend. Yota gets pissed off after Naruto got attacked, he quickly uses his lightning to kill all of them. They quickly run from there.

They do this when they encounter a stream of water running, it’s deep but they want to get through it. They try but Naruto, Yota, Choji and Shikamaru fall. Yota notices Choji and Shikamaru, and saves them. Naruto is still going, at this point, Yota saves him but collapses in the water which he keeps on running.

They try and catch up to him. They notice that these could be his last few moments. He’s okay that they’re okay. He’s ready to give up, when Naruto tries to stop him, they hold his hand when Yota wipes their memories, fortunately, it wasn’t permanent. From this point on, everyone went on living as they were and they forgot that they were friends.

Naruto can’t seem to be able to kill him. Naruto hears a familiar sound when Naruto and the others are connected by the telepathy thing. Naruto is happy that they’re all okay. He explains that he was already dead and that he was under the Edo Tensei. He remembers that he was a weak child. He was paid for his ability to create rain. He died but Orochimaru saw the potential and brought him back.

He mentions that after he died, he had so much fun with them, he was no longer alone and was able to meet new friends. He mentions that they’re all grown up so much. Naruto tells him that they can once again more fun, for the last time. It starts to snow, it fills and covers him up. A lightning shock come and destroys him, as he has no regret. Yota dies here, Naruto Shippuden 315 ends here.

A good arc that made some sense, and it tried to link most of the things we know about the Edo Tensei, but it seems that they’re trying to connect a lot, stuff that shouldn’t really be ruined. They need something fresh and new to work with, Next time, Naruto Shippuden 316, titled “The Reanimated Allied Forces”, deal with the current story with some background information which could be somewhat interesting.